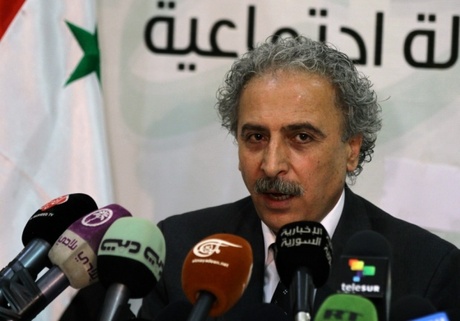 A prominent Syrian dissident has launched a new opposition party, calling from Lebanon for free and fair elections in Syria.

Louay Hussein says time for war is "over." He spoke in Beirut on Friday at what he described as the first press conference by his National Bloc.

Hussein's party emerged in late January when he traveled to Moscow for Russia-hosted talks with opposition figures tolerated by President Bashar Assad's government.

Hussein seems to support cooperation with Assad's government but it's unclear what kind of traction or following he'll garner or if he'll be accepted by the rest of the deeply fractured Syrian opposition groups.

The U.N. is planning to convene Syria peace talks in Geneva on February 20. It is not clear whether Hussein's National Bloc will be invited.

he is one of my stooges and the meeting held at the Riviera Hotel was my idea.

He is not opposition. He is a Moscow loyalist

Liar and pants on fire. Will the Pro Iran brigade ever stop lying