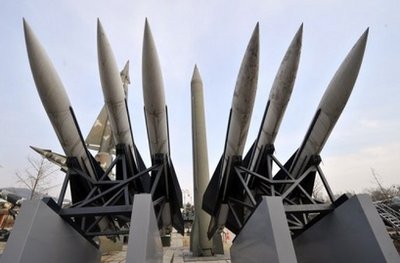 Prime Minister Shinzo Abe, whose country would be in range of a hostile North, called the launch "absolutely intolerable". South Korea said Pyongyang was testing Trump.

The missile was launched around 7:55 am (2255 GMT Saturday) from Banghyon air base in the western province of North Pyongan, and flew east towards the Sea of Japan (East Sea), the South's defense ministry said.

It flew about 500 kilometers (310 miles) before falling into the sea, a ministry spokesman said, adding the exact type of missile had yet to be identified.

"Today's missile launch... is aimed at drawing global attention to the North by boasting its nuclear and missile capabilities", the ministry said in a statement.

"It is also believed that it was an armed provocation to test the response from the new U.S. administration under President Trump," it added.

It was the first such test since last October.

Trump responded with an assurance to the visiting Abe that Washington was committed to the security of its key Asian ally.

"I just want everybody to understand and fully know that the United States of America stands behind Japan, its great ally, 100 percent," he said, without elaborating.

Abe denounced the launch as "absolutely intolerable" while top government spokesman Yoshihide Suge told reporters in Tokyo it was "clearly a provocation to Japan and the region."

North Korea is barred under U.N. resolutions from any use of ballistic missile technology. But six sets of U.N. sanctions since Pyongyang's first nuclear test in 2006 have failed to halt its drive for what it insists are defensive weapons.

A South Korean army official quoted by Yonhap news agency ruled out the possibility of a long-range missile test, describing the device as an upgraded version of the North's Rodong missile.

South Korea's acting president Hwang Gyo-Ahn vowed a "corresponding punishment" in response to the launch, which came on the heels of a visit to Seoul by U.S. Defense Secretary James Mattis this month.

Mattis had warned Pyongyang that any nuclear attack would be met with an "effective and overwhelming" response.

Australian Prime Minister Malcolm Turnbull also condemned the launch as a "further threat to regional... peace and stability" and vowed to work with Beijing, Seoul and Tokyo to heap pressure on Pyongyang.

In January leader Kim Jong-Un boasted that Pyongyang was in the "final stages" of developing an intercontinental ballistic missile (ICBM) in an apparent attempt to pressure the incoming U.S. president. Trump shot back on Twitter, saying "It won't happen."

James Char, senior analyst at the Institute of Defense and Strategic Studies in Singapore, said the launch was Pyongyang's "way of showing characteristic defiance against... Trump."

The latest launch poses a test for Trump, who will need the help of the North's closest ally China to deal with the reclusive state.

Relations have thawed in recent days after Trump reaffirmed Washington's "One China" policy in what he described as a "very warm" telephone conversation with President Xi Jinping.

Analysts are divided over how close Pyongyang is to realizing its full nuclear ambitions, especially as it has never successfully test-fired an ICBM.

But all agree it has made enormous strides in that direction since Kim took over after the death of his father in December 2011.

A country of Resistance against the Western Imperialism that cut their country in half.

Idiot ... Ask the Koreans which part they prefer? One of the richest most advanced countries in the world or a maniacal backward police state? Have you actually known or talked to a single Korean in your life? This is the same choice you give us and you wonder why we chose life, freedom and democracy!