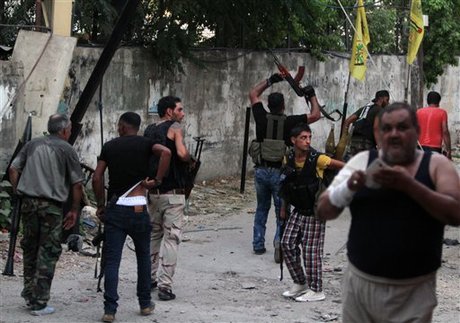 One civilian was killed and six were wounded on Tuesday in fierce clashes that rocked Lebanon's largest Palestinian refugee camp for the sixth day before a ceasefire started to take hold in the evening.

State-run National News Agency said the ceasefire got underway around 7:00 pm in Ain el-Hilweh after "all parties pledged to the committee that was formed at Palestine's embassy that they will abide by the truce."

The committee had met with Palestinian National Security chief Maj. Gen. Sobhi Abu Arab in the camp's al-Briksat neighborhood as well as with the leadership of the Usbat al-Ansar group in the al-Sifsaf neighborhood.

The fighting in Ain el-Hilweh near the southern port city of Sidon has pitted Fatah Movement members loyal to dissident official “al-Lino” against hardline Islamist groups led by the militant Bilal Bader.

Even as factions declared a ceasefire from the Palestinian embassy in Beirut, plumes of smoke could be seen rising from the camp on Tuesday afternoon, AFP's correspondent said.

The two groups involved in the fighting were not represented in the meeting, according to media reports.

The sharp crackle of gunfire was partly drowned out by the Muslim call to prayer from nearby mosques in Sidon, where hundreds of people displaced from the clashes had sought refuge.

"A 23-year-old civilian was killed in the fighting," a medical source at the Rai hospital in Sidon told AFP.

"We also treated four people including a young boy who was hit by a stray bullet and who is in critical condition," the source added.

Intermittent fighting broke out on Thursday after Fatah pulled out of a joint committee that maintained security in Ain el-Hilweh, but the violence later intensified, AFP's correspondent said.

Palestinian factions meeting at their embassy in Beirut on Tuesday announced that they had agreed on a ceasefire to end the fighting.

According to state-run National News Agency, the groups said they would re-establish the joint security apparatus.

By long-standing convention, Lebanon's army does not enter Palestinian refugee camps, where security is managed by joint committees of Palestinian factions.

In recent years, tensions have risen between Fatah and the Jund al-Sham Islamist group in the camp.

The U.N.'s Palestinian refugee agency said on Tuesday it had halted all services in the camp for the second day because of the unrest.

"Due to the violent clashes that erupted in Ain el-Hilweh and taking into consideration security considerations, all UNRWA services were suspended yesterday and today," the agency's statement said.

Ain el-Hilweh is an impoverished, overcrowded camp near the coastal city of Sidon, and is home to some 61,000 Palestinians, including 6,000 who have fled the war in Syria.

Isn't it time these camps are bulldozed?

And what do you propose to do with the people who live inside?

Blablablabla ... When you get your facts wrong, speak. Fascist.

Blablabla ... Go F yourself and into the hole you came from. I am Lebanese and definitely more human than you are. Fascist.

A great contribution to the discussion by a self proclaimed fascist.

A fascist is a person that call a group of people (here Palestinians) scum of the earth and who is willing to evict them and make them homeless! (See his idiotic comments below )

You said once by yourself you re not lebanese but syrian

and besides that about the palestiniens camps, they did not destroy our country through the civil war.

You re looking like among those that committed massacres during the lebanese civil war and were calling fascists all those that were defending our lands.
So definitly you re not lebanese but an "islamo-communist murderer" to take back the local rethoric used in the 70's

Really FT. A Lebanese militia can invade and render millions of Syrians homeless but we cannot impose law and order on few camps!

all these actions sound good, but are they realistic and could be achieved!?, i think not.

getting rid of the Palestinians, Lebanon would be the beneficiary and many problems would be solved, land to explore and less armed conflicts that the Palestinians are originating, besides the civil war which they provoked and the theft of the country's wealth.

therefore, to be realistic, these camps can only be bulldozed when the zionist state accept to make peace with Palestinians in order to build their own country, thus all refugees must be then returned to their's.... but the Israelies instead of facilitating the peace process, they build more and more settlements in west bank in order to avoid such deal....

btw, they are asking to make peace with Lebanon that's not needed, but with the Palestinians yes, this is how Lebanon would benefit.

instead of making poetry statement, tell me what is the solution, if not the ones i state, the zionist occupier must abandon the occupied territories to let the Palestinians to back to their homes.

btw, the arabs which you praises here, are the obstacle for that to happen, because they ally with the zionist state, work together and support it..... they see Iran as their enemy, a country which support this cause.... demagogue & real FASCIST.

"Your Iranian Mullahs said they will help Liberate Palestine and return the Palestinians back to Palestine" :

they are not my mullahs, but the Saudi mullahs don't even mention that, but rather they give support to Israel and work togather..... is this the way toward the liberation Palestine!?, surely not.

"Your Nassrallah has declared that the Road to Palestine passes through Qusair, Homs, Aleppo and so on till they reach Palestine":

lie.... but getting rid of ISIS terrorism which was founded by Usa to destroy the axis of the resistance, would help.

those are the arabs who want to liberate Palestine...

the title concide with what i said, that getting rid of ISIS in Syria help to liberate Palestine, and therefore this is what Nasrralah said but not as you state above

"Your Nassrallah has declared that the Road to Palestine passes through Qusair, Homs, Aleppo and so on till they reach Palestine. "

you see how inconsistent & liar you are....

You really make little sense. Did you read what I wrote or you simply want to troll. And FYI the Egyptian dictatorship supports your Assad regime! None of them will liberate anything.

Yes togather. What are you gathering these days?

Do I need say more? Dear Lord, your ability to combine politics, movie stars, human aspects, and finance in one sentence is just a touch of genius!

he is something anazar, isn't he!? He's an alien, but not a legal one.

The fascists have spoken!!!

FT ... You are a fascist ... Anyone with a brain who read your comments can see the obvious

Time for Lebanon to enforce the State law on every inch of its territory. Else this country is bound to another civil war, worst than what we knew.

To solve the Palestinian problem for them and more importantly us, the Lebanese. We need to send then back to Israel/Palestine. The way to get them home is to offer a peace treaty with the Israelis as long as they return the Palestinians to their home. The Palestinians have been nothing but trouble to Lebanon. They used us and manipulate us to think we sound fight for them and against ourselves. Look at what they did to the Lebanese army in how they created the Lebanese Arab army. This was their way to weaken us and strengthen them. They did not care who help them Christian or Muslim. They just want to destroy Lebanon and control us. Every Lebanese suffered because of them and continue s to suffer.