Report: US Says Aoun's Pro-Hizbullah Stances Could Push Out UNIFIL 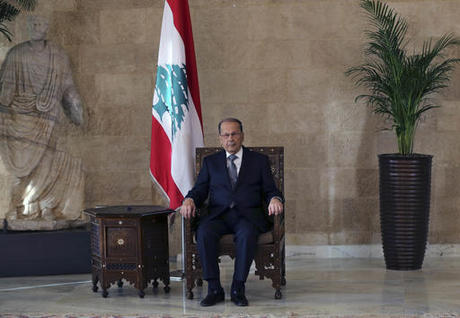 Ambassadors of six countries, the United States and the European Union sounded the alarm over President Michel Aoun's latest statements about Hizbullah's arms, amid threats that the UNIFIL could withdraw its peacekeeping mission from south Lebanon, MTV reported on Friday.

According to information obtained by MTV, the meeting addressed three main issues: The upcoming parliamentary elections and the new electoral law, the security situation in Lebanon including backing the Lebanese Army, the International Brussels Conference on the Syrian crisis and the Syrian refugees in Lebanon.

On the elections, the conferees emphasized the need to conduct democratic and transparent parliamentary polls. However, they refrained from making a statement in that regard, avoiding interference in Lebanon's affairs, but agreed to have talks with the government to urge staging timely polls, added MTV.

As for supporting the Lebanese army and ensuring a sound security situation, the ambassadors stressed the need to abide by UN resolution 1701 that comprised limiting the presence of arms to the army and providing it with the aid needed in accordance with the resolution.

Talks highlighted the latest statement of Aoun during an official visit to Egypt, which they said does not abide by resolution 1701, but merely reflects visions of a single Lebanese party.

They agreed to have talks with Lebanese defense minister and other officials prompting the need to respect the resolution, since a failed approach affects international assistance for the army mainly from Saudi Arabia and the US.

The Chinese ambassador has pointed out to lack of harmony between the President's stance and the Prime Minister's, said MTV.

The Italian ambassador has however stated that Aoun's rhetoric does not benefit the Lebanese cause.

The US ambassador has however, revealed a tendency to pull the UNIFIL forces from southern Lebanon if the country does not abide by international conventions.

For his part, owing to Aoun's stance, the French ambassador said it is unlikely for a conference to provide Lebanon with the material and moral support in Paris to be held in the next few months, it concluded.

Mr Aoun is a total screw up when it comes to diplomacy. he's absolutely clumsy and will harm not only Lebanon's interests, but also our very own safety. This is another proof that he is not qualified for the job if anyone still had doubts. Our government isn't any better.

Agree! Biggest lie is that Aoun is helping Christians and Hizbollah the Shias. Truth is both are causing disastrous irreparable harm to their communities. Christians, Shia and all communities will only benefit and prosper if the country evolves towards real democracy, full independence, regional neutrality, long-term peace and stability, transparent institutions and economic growth. Aoun and Hizbollah are a poison to all these objectives. The damage they are causing is as serious as cutting the spinal cord of the country. Aoun is building a house of card to help Christians that can tumble in one night at Hizb whim, instead of building a country on solid democratic foundation, transparent institutions, and disarming all militias, especially those funded by Iran and Assad. As to Shia, their freedom and openness was once aspiration of the Iranian revolution, now they are being molded by Hizb into the oppressive, indoctrinated, and extremist views of Iranian Junta, emulating North Korea.

In short, get rid of Article 24's set-aside of half of Parliament to Christians!

Being able to Deter Israeli aggression is Extremist you Zionist slave!!!

So Lebanon should be enslaved to the enemy paid zionist whores in Washington?

Nobody has killed more UNIFIL members than israel, and they whine about Aoun being pro hezbollah? Of course he is going to be pro-hezbollah, because he is pro-Lebanon.

and who cares if they want to withdraw the UNIFAL? allah ma3on

@_mowaten_
What can one say, another E-X-C-E-L-L-E-N-T comment. I particularly enjoyed the part where you said " pop an artery yet? "

Now we have a President that can't be bought, a President with honor and love for his country unlike the last one we had.

If death is honor then you can follow through with your statement please go ahead Israel is but a stone throw away. You have spoken like a man then be the man of your words instead of the Iranian stooge.

It is easy to read that the ones against Resistance and the President are all Israelis or Salafis.

waw! so half lebanon is either salafi or israeli... pityful miss tic

but you of course are lebanese as you pledged allegiance to the islamic revolution of iran ma hek? LOL

Now we have a president who restores honor North-Korea style while moving the country towards economic ruins, isolation, ridicule, and subservient regime to the force of foreign arms. He is a marionette in the hand of his Handlers. True courage is those Shia and others who dares to stand up to the Hizb and its regional agenda. Hizb is simply Iranian Junta's occupation army in Lebanon. It has destroyed Lebanon in 2006 to serve Iranian interests and will do so again without hesitation when it is ordered by Iran's Junta responsible for making Iran, a nation with a glorious civilization and huge natural resources, a failing state in every respect except arms and threats (like North Korea).

all that? walla very dramatic

an atheist who says 'walla'!

Aoun: there was no justification for Hizballah's remaining armed in the wake of the Israeli withdrawal from south Lebanon, since both the Israeli threat and Sheb'a farms issue were nothing more than pretexts used by Hizballah. He added that he was seeking to gradually deflate Hizballah's "sacred" image among the Lebanese and Arab public as the victorious resistance to Israel, and show that there was no continued justification for militias independent of the central government.
wikileaks - cables 05PARIS2162_a

Aoun noted that while considering his return to Lebanon he had met in Paris with the envoys of Lebanese President Lahoud, including Lahoud's son and long-time political operative Pakradouni. He claimed that he had come to an agreement with Lahoud's envoys to drop the legal charges pending against Aoun that were leveled by the pro-Syrian government at the time of Aoun's "war of liberation" against the Syrians. Aoun said charges of misappropriation of state funds had been dropped in a legal proceeding May 4

"...but merely reflects visions of a single Lebanese party.":

no, Aoun stance reflects the majority of the Lebanese society one, they don't want to be under either ISIS or Israel domination...

Your wrong again southern Lebanon is not Shia or Iran yes we do have them in Lebanon but they do not represent all of all the Lebanese.

large part of the Lebanese regardless of their sectarian affiliation do support the existence of the resistance, Lebanon now is the most secure country, comparing to the all of the region, the so-called Israel and Nusra's terrorists are the enemy, the resistance is keeping them out.

"Aoun stance reflects the majority of the Lebanese society one"

I respect general aoun who is now president for his pro- hezbollah stances; I just do.

This is another reason why no one wanted Aoun as president because most Lebanese do not beleive Lebanon should be a part of Syria and this is what Iran wants.

The Lebanese want to be able to deter Israeli ENEMY aggression. I know you zionist hate Arabs who dare to resist your criminal existence.

The US ambassador has however, revealed a tendency to pull the UNIFIL forces from southern Lebanon if the country does not abide by international conventions.

"The US ambassador has however, revealed a tendency to pull the UNIFIL forces from southern Lebanon if the country does not abide by international conventions."...The US paid Zionist whore should ask the Israeli terrorist state to abide by "international convention". UNIFIL NEVER stopped Israeli invasions and aggressions. The Lebanese Resistance is the ONLY Arab entity that that is able to deter Israeli aggression with IMMUNITY and this worry the Israeli enemy, states that support it, and its puppets.

So he will not be assassinated by the zionist enemy and Lebanese collaborators. I am talking about deterring Israeli aggression against Lebanon with IMPUNITY. I do not care about Nasrala and his safety. BTW, for someone in "hiding", he meets more Lebanese leaders than anyone else.

I wish HA was a secular resistance party being supported by a secular state. I also wish that the criminal zionist entity did NOT exist OR the Arab states were not worthless weak slave states so there would not be a need for resistance!

I don't believe that UNIFIL will be withdrawn as that would open the door to a direct confrontation with Israel, something that no one wants at this time.

BtW, I do not here M14 LEBANESE leaders criticizing the NEED to be able to defend Lebanon from Israeli aggression. ONLY enemy Zionists like those commenting here.

You are the one who is against arming the LAF. I WANT those weapons for the LAF.

You can tell WHO the enemy zionists are here. They are ALWAYS defending the zionist paid WHORES in Washington, but NEVER denouncing Israeli occupation and aggression.

you can't possibly be serious yalla00