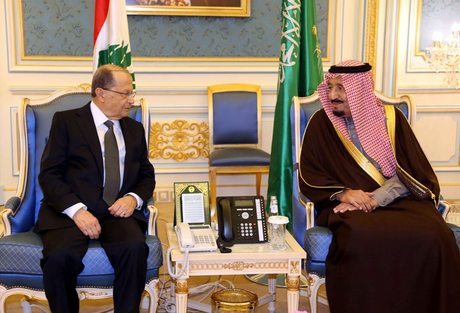 Saudi King Salman bin Abdul Aziz has canceled a scheduled trip to Lebanon this month amid reports claiming that statements made by President Michel Aoun about Hizbullah's arms were to blame, media reports said on Monday.

The King had plans to visit Lebanon in March to "interpret the Saudi leadership's desire in helping the Lebanese state and encourage it to fulfill its Arab and international obligations, and the settlement that ended the presidential vacuum,” said An Nahar daily.

Saudi sources told the daily “the visit was supposed to give Lebanon a strong moral and political boost from the Kingdom and Gulf states as well, and open the doors wide for unconditional return of Arab and Gulf tourists to Beirut. It was to be accompanied by tangible economic support for the Lebanese state.”

After his election as president in November, ending more that two years of presidential vacuum, Aoun visited Saudi Arabia in January on a mission to patch up ties after a tense year which saw Saudi Arabia freeze the aid deal over what it said was the dominance of Hizbullah.

Analysts say Saudi Arabia was hoping for a more stable Lebanon, after concerns over the role played by Hizbullah in the Lebanese government and the threat posed by jihadists and the war in neighboring Syria.

But later and during an official trip to Egypt, Aoun said in an interview on the Egyptian TV channel CBC, that "Hizbullah's arms do not contradict with the State and are an essential component of the means to defend Lebanon.”

The statement raised a flurry of reactions mainly concerns that mended relations with Saudi Arabia could again witness a twist, reports said.

Religion in politics is the main rootcause of the Middle-East misery, all other reasons/factors are side effect....

if the resistance arms are being used against the Israeli enemy and against the terrorism of Daesh, i wonder why Saudi is against!!?, isn't that the kingdom is forced by Usa to assist in the protection of the so-called Israel and that the Daeshists are their brothers in blood and thoughts!!

you are the only reason i read the news. I am getting an online degree in Political Sciences just reading your comments.

a daeshist and a degree aren't feasible, above all for an illiterate!!!!!... ufff.

Good thing we won't have this crooked king by our doorstep soaked with the blood of Yemeni children.

Yes, not to mention that some Indonesians called the crooked king "The peaceful face of Islam"

Money can buy most things, but never Resistance or victories.

What bunch of liars and hypocrites. We have someone who is a mass murderers next door that you detestables support. Have some shame. Indeed money aided by sectarian fanaticism can buy many things and in Lebanon, we see it buying Iran a whole militia

Another lie by sleezethrower. You may love the likes of ISIS, I do not.

Assad is an honorable man, not a murderer.
Assad stands by his own people.

Salman the crooked are someone lusty for power and money, he fights for money not for honor, thus you people are very dishonorable.

Mystic ... And you wonder why you have zero credibility. A man that lorded over the slaughter of hundreds of thousands of people including the liquidation of tens of thousands of prisoner is most definitely a murderer. And a person who defend him and call him honorable is delusional.

Yet the majority of the Syrian people that lives inside Assad Government areas are sunnis.

Compared to the takfiri rebel areas, how many minority groups lives there?

Because the overwhelming majority of Syria (over 80%) are Sunnis and because of the balance of power the regime controls most of the urban areas. And yes, there are minorities in rebel held areas such as Idlib and especially christians

And yes the regime is criminal because it does liquidate anyone that oppose it (even politically) and wantonly destroys cities and towns controlled by rebels with utter disregard for the lives of civilians. This regime is responsible for 95% of civilian death in Syria. In one prison Saadnaya, the regime executed 10,000 prisoner - more than the civilian casualties caused by all other parties combined and since the start of the war. This include opposition, Americans, Kurds, Isis, Russians! So keep your delusions and send my greeting to your beloved comrade Kim

You are indeed a salafidemocrat, Kefraya and Fuaa are besieged they are not in Salafi hands.
Idlib is the Salafi capital of Syria now alongside Raqqa.
Where are the christians in Idlib you mentioned?
I never heard of those people, you sure they are not dead or converted to your Wahabism?

It was never a secterian war to begin with, because indeed Assad government controls most urban areas whom are Sunnis, those sunnis supports their government too.

Your King salman thought he could buy a victory salafi revolution In Syria, with just money to achieve victory over Assad and the Resistance.

Well you failed, and you managed to burn all of Syria and cause millions of refugees to flee because of your forsaken revolution.

Delusional Mystic. I called Assad a criminal. You are the sectarian along with the Iranian Amen crowds. He will kill me, you and anyone to stay in power and as multiple human rights organizations have shown, he has committed mass murder against the Syrian people. And since the overwhelming majority of his opponents are Sunnis, it is those areas and those people that took the brunt of his criminal actions. With regard to Idlib, the province has and continue to have Christian community and especially around Ariha (same city bombed by the Assad air force a week ago). I never talked about Kefraya and Foua. Nice try. Please do not forget to send my greeting to your brotherly comrade Kim

Delusional Mystic .... The Syrian regime through your sectarian militia has a firm hold over Homs, Qusayr and most of western Qalamoun. I wonder why their towns and neighborhood are still mostly depopulated and their inhabitants are in Lebanon!

You people have more fabricated documents such as the Amnesty report?
I watched a Video with a journalist showing Assad that propaganda, and Assad simply laughed it off, It was a funny sight.

Reminded me of you people claiming all this propaganda, and getting laughed off by the rest of us.

miss tic: was aoun a salafi paid by saudis when he said that the syrian regime was a terrorist regime?

Here is Assad giving the perfect question to a Pro Western journalist, whom used so called evidence with verification.

Comrade Mystic ... Please send my greeting to our beloved comrade and demi God Kim. I am on the way to Amnesty International and HRW to fabricate more reports. Oh sorry, did I expose your inside source!!! Bad me, I must be more careful. But seriously, can you get your inside sources inside Assad Syria to tell us what happened to the thousands of Lebanese who were disappeared during the Assad occupation. Their families will be highly appreciative and I will guarantee if you can help return them to their families a very substantial financial compensation

Yeah, because Lebanon sure was beautiful in the late 70s/early 80s before Hezbollah came around? How is Hezbollah to blame?

May be the loss of economic opportunity exceeding 100 billion dollars

So Texy again blames Hezbollah for a war that began long before the group even existed. Those who don't know history are doomed to repeat it.

People like flamethrower are a disgrace to the Shia community in Lebanon and elsewhere.

flamethrower; you mentioned before you were an ultra right Christian and at one point in your illustrious career you were a member of the Lebanese Resistance Movement (Tanzim)...lol.

were you banned again @hajibaba?

FT ... You proved yourself to be a racist and a liar on many occasions. Show me where A.T made racist statements against Shias?

FT ... You proved yourself to be a racist and a liar on many occasions. Show me where A.T made racist statements against Shias?