Next Syria Peace Talks to Start in Geneva on May 16 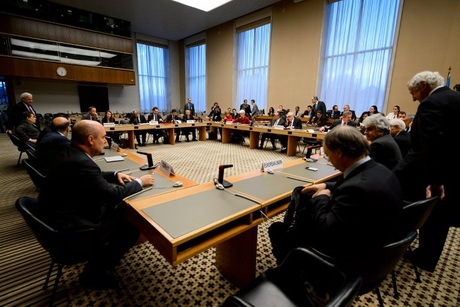 A new round of United Nations-backed peace talks for war-ravaged Syria is set to begin in Geneva next week, the office of the U.N. mediator said Monday.

"Special Envoy Staffan de Mistura will reconvene the intra-Syrian talks under the auspices of the United Nations in Geneva on 16 May 2017," the U.N. said in a statement.

The announcement comes days after regime backers Russia and Iran and rebel supporter Turkey signed a deal in the Kazakh capital Astana to strengthen a ceasefire agreed upon last December by implementing "de-escalation zones" where the government and opposition will halt hostilities.

De Mistura, who was in Astana as an observer, hailed that deal as "an important, promising, positive step in the right direction" toward de-escalation.

On Monday, his office said the U.N. mediator hoped last week's Astana agreement "will be implemented in full -- thus bringing about a significant de-escalation in violence, and helping shape an environment conducive to the political intra-Syrian talks in Geneva."

Years of diplomatic initiatives have failed to end Syria's war, which has killed more than 320,000 and displaced millions since it started in March 2011 with protests against President Bashar al-Assad's regime.

Numerous rounds of U.N.-backed peace negotiations in Geneva have fallen short of producing concrete results, although during the last round in March the sides finally got into some substance after spending previous rounds discussing the agenda for the talks.

In accordance with U.N. Security Council resolution 2254, they began discussing four separate "baskets" of issues, on governance, drafting a new constitution, elections and combating terrorism in the war-ravaged country.

But with the sides remaining hopelessly deadlocked over the fate of Assad and violence on the ground, there were few signs of a breakthrough.

In the round starting next week, and in subsequent rounds of talks, de Mistura "is looking forward to intensified work with invitees on the items on (the) agenda of the talks, within the context of the overall framework of relevant Security Council resolutions, in particular resolution 2254," Monday's statement said.

"The Special Envoy continues to press strongly for the meaningful participation of women in the political process," it added.

De Mistura will be briefing the U.N. Security Council on the talks "in the course of this month," the statement said.