Report: Lebanese Delegation in Washington to Avert US Sanctions Threat 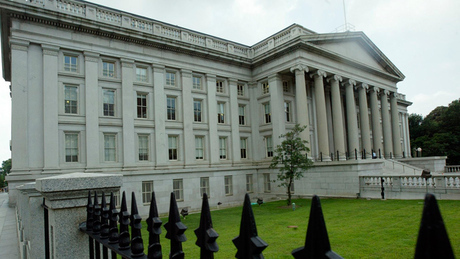 In light of concerns that the US administration might impose new financial sanctions against Lebanon, a parliamentary delegation began a visit to Washington to ward off the threat, media reports said on Wednesday.

A delegation began a visit to Washington to discuss ways to strengthen the Lebanese-American ties, especially after Lebanon has achieved the necessary financial legislation in line with international banking and financial standards, al-Joumhouria daily reported.

The delegation is comprised of MPs Yassin Jaber and Mohammed Qabbani, media adviser to the Speaker Ali Hamdan and Lebanon's ambassador to Washington Antoine Shedid.

During the one-week planned visit, the delegation is set to hold talks with congressmen, senators, deputies and figures of the US administration.

It comes in light of concerns that the US administration might impose new financial sanctions on specific Lebanese figures and institutions doing business with Hizbullah, said the daily.

Sources from the delegation told the newspaper “the visit is a continuation of the mission initiated by the parliamentary delegation last year to discuss ways to strengthen the Lebanese-American relationship, particularly that Lebanon has achieved the necessary financial legislation in accordance with international banking and financial standards.”

"The delegation plans to ask the US administration to renounce additional sanctions," they said, "mainly that Lebanon enjoys significant assistance from the US government to its armed forces and Lebanese army."

The visit is the second in a row commissioned by Speaker Nabih Berri and aims to set ground for a Lebanese-American parliamentary friendship committee, it added.

On the other hand, unnamed diplomatic sources told ad-Diyar newspaper that the Lebanese delegation, which also includes a group of bankers led by governor of the Central Bank Riad Salameh, has begun holding meetings with US Congress officials in an attempt to influence hard-line trends of some US financial and political bodies against Hizbullah and Lebanon.

They submitted a presentation on the mechanism of Lebanese banks and monetary institutions, focusing on their absolute commitment to international laws and the reflection of this mechanism on the overall financial situation.

The sources remarked that a tightening of US financial sanctions will pressure Lebanon's banking sector in the first place, which in turn will lead to destabilization of social security and threaten the situation as a whole.

The world's decision-making capitals are keen on keeping the Lebanese arena protected from imbalances that may be indirectly reflected on the Lebanese people and displaced Syrian and Palestinian persons who, if the economic and social conditions falter, will change their orientation towards the Western countries, diplomatic sources told ad-Diyar.

The US administration should expel these traitors immediately.

What is this thug doing with the delegation? He should be on the sanctions list himself along with his mafia criminal boss.

I have the utmost respect for the Lebanese Delegation visiting Washington to Avert US Sanctions Threat.

Is the Lebanese delegation in Washington to announce that the government will take up anti-terrorism operations and expel Hizb? Because if not, the trip's just a waste of jet-fuel.

Watch for another warning bomb to go off by a bank as another one of their childish threats.