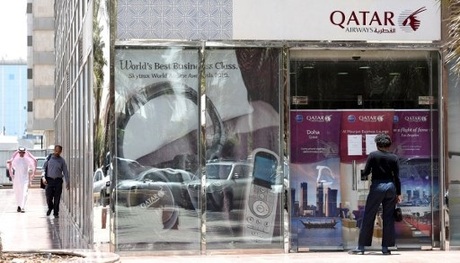 US President Donald Trump has accused Qatar's leadership of bankrolling extremists and demanded a halt to that funding, drawing praise Saturday from Saudi Arabia and its allies.

Their approval came as Washington joined intensifying international efforts to heal the rift between the key Western Gulf allies, which has escalated into the region's worst diplomatic crisis in years.

Russia on Saturday urged dialogue between the parties, as Qatar's foreign minister arrived in Moscow seeking support from abroad in the dispute.

Trump's warning overshadowed an earlier declaration from US Secretary of State Rex Tillerson -- who encouraged Saudi Arabia and its allies to ease their land and sea "blockade" of Qatar.

Tillerson said the blockade was hindering the US-led campaign against the Islamic State group and having humanitarian consequences for ordinary people.

But US officials insisted both men were sending the same message that the countries of the region should not allow their differences to hinder the fight against extremism.

Qatar is home to the largest US airbase in the Middle East, making it a key ally in the US-led coalition against the Islamic State group in Iraq and Syria.

But it has fallen out with its Arab neighbors, who accuse it of sponsoring extremist groups, some of them allegedly linked to arch Saudi foe Iran, fomenting trouble across the region.

The neighbors also resent Qatar's ties to the Muslim Brotherhood movement and its sponsorship of the pan-Arab satellite television network Al-Jazeera, which has given opposition figures a platform.

Qatar has denounced the allegations of terror funding as baseless and has received the support of its close ally Turkey, which has approved the deployment of troops to defend the emirate.

"We appeal to the US administration to rely on their own sources and not on countries with political agendas," Qatar's ambassador to the US, Meshal Hamad Al Thani, wrote in Twitter.

But its neighbours seized Saturday on Trump's remarks as vindication of their position and of the crippling sanctions they imposed on Monday. However, they ignored a US call for them to ease their economic blockade against Qatar.

"Fighting terrorism and extremism is no longer a choice, rather... a commitment requiring decisive and swift action to cut off all funding sources for terrorism regardless of its financier," the Saudi Press Agency cited an official source as saying.

But the three governments made no mention of Tillerson's appeal for them to end their land and sea blockade of Qatar.

The US president's rhetoric on Friday did not appear likely to calm spirits in Doha.

"The nation of Qatar, unfortunately, has historically been a funder of terrorism at a very high level," Trump told reporters in the White House Rose Garden, as Tillerson looked on.

Less than two hours earlier, Tillerson had approached the crisis from a different direction -- warning that the stand-off between the former Gulf allies was undermining the anti-terror fight.

He did urge Qatar to be "responsive to the concerns of its neighbors" and immediately crack down on extremist funding.

But he also warned that the response -- Bahrain, Egypt, Saudi Arabia and the United Arab Emirates cut diplomatic ties on Monday and are trying to blockade Qatar by air and sea -- could be counterproductive.

"The blockade is hindering US military actions in the region and the campaign against ISIS," Tillerson warned.

Although US officers had previously denied the blockade was a problem, Pentagon spokesman Captain Jeff Davis said the "evolving situation is hindering our ability to plan for longer-term military operations."

- 'Fighting terrorism' -Tillerson said he had spoken to many leaders in the Gulf region in recent days and supported efforts by the emir of Kuwait to resolve the stand-off.

The tough US line was a rebuff for Qatar's efforts to reach out for support from abroad.

"We cannot be happy in a situation when the relations between our partners are worsening. We are in favour of resolving any disagreements through... dialogue," Lavrov said.

A statement said the list shows that Qatar "announces fighting terrorism on one hand and finances and supports and hosts different terrorist organizations on the other hand."

The crisis is drawing in more countries.

Turkey's parliament has approved deploying troops to a base in Qatar and Iran has offered to send food.

The moves taken against Doha include banning Qatar Airways from airspace and closing Qatar's only land border with Saudi Arabia. The Arab states have also ordered Qataris out within 14 days.

have you not heard of hierarchy? but you shia follow Ayatollas... weird!

Emirs/princes are below Kings and they need to obey them otherwise they get a sa7soo7 like the Qataris!

"since we're talking about one man, King Salman, who denies the existence of other persons as equal partners in the business of living. "

I don't believe King Salman claims he is God's representative on earth like your Waliy Al Faqih does. Khamanei claims he meets twice a week with the Mahdi.

Now, go change your name to abbas, jaafar, or ali and stop using the name chris ya heretic!

The US armed Saddam? With scud missiles? F16? Abram tanks?

liberty 10 hours ago
Qatar like its ally Iran are known and proven to finance and support terrorism. However; Qatar does not have a militia but Lebanon does.

Lebanon is even worse than Qatar. It has a terrorist criminal organization waging wars and committing massacres in several parts of the world under the banner of Hussain and has MPs and ministers in the Lebanese cabinet.

Lebanon should be boycotted and sanctioned even more than Qatar.