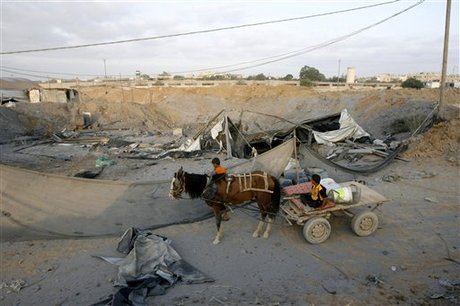 The Gaza Strip may already be "unlivable," a United Nations official warned Tuesday, after a decade of Hamas rule and a crippling Israeli blockade.

Robert Piper, the U.N.'s top humanitarian official in the Palestinian territories, told AFP in an interview to mark a new report on living conditions in Gaza all the "indicators are going in the wrong direction."

"We predicted some years ago that Gaza would fast become unlivable on a host of indicators and that deadline is actually approaching even faster than we predicted -- from health access, to energy to water," he said.

A 2012 U.N. report predicted the Palestinian enclave would be "unlivable" by 2020 if nothing was done to ease the blockade.

Piper pointed out that power supplies were down to as little as two hours a day in Gaza, where medical care had been slashed and youth unemployment was over 60 percent.

In such circumstances "for most of us that unlivability point has already been passed," he said.

"And yet somehow the Gazans soldier on."

The Islamist Palestinian movement Hamas seized Gaza in 2007, leading Israel to impose a crippling blockade which critics say punishes all of the two million residents indiscriminately.

Since 2013 Egypt, the only other country with which Gaza shares a border, has largely closed off its crossing and destroyed hundreds of smuggling tunnels that provided a vital lifeline for the economy while also allegedly being used by Hamas to smuggle weapons.

The new U.N. report, "Gaza -- Ten Years Later," says more than 95 percent of Gaza's water is now unfit for drinking, while electricity supplies have reached critical levels in recent months -- falling to only a few hours a day.

The secular Palestinian Authority, which runs the internationally recognized government in the West Bank, has recently begun a campaign to squeeze Hamas -- including cutting funding for electricity and allegedly reducing the number of permits given to sick Gazans seeking medical treatment outside the enclave.

Maybe that same UN official should ask the Hamas rulers of Gaza as to just where the millions of dollars donated for reconstrution and development have disappeared to.
He should also ask himself as to why there is an Israeli blockade. Maybe it is because Hamas tried for years to smuggle arms and other illegal materials into the Strip.
He should also ask himself why millions are being funnelled through UNWRA to the grandchildren and great grandchildren of the 1948 refugees. The UNHCR recognises only refugees who they themselves left their homes not their descendents.
All these wasted monies, should they have been used to improve conditions in the Gaza Strip would have improve their lives by hundreds of percent.
But why should that bother him when it is much easier to blame Israel.