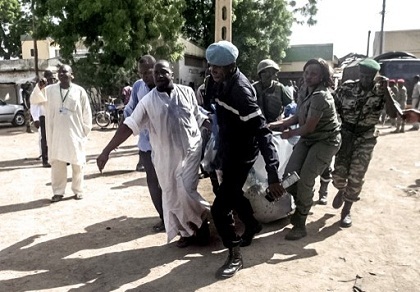 The bombings, which took place on Wednesday evening in Waza near the Nigerian border, targeted a busy area in the market town, the sources said.

The bombers struck an area with "restaurants, telephone cabins and kiosks", a local official said.

"The town has been sealed off. Nobody can enter and nobody can leave," the source said, adding that some of the wounded were in "quite serious" condition.

Though Boko Haram was born in Nigeria, the Islamic State-affiliated group has carried out frequent attacks in Cameroon, Chad and Niger, prompting the formation of a regional force to fight back.

Cameroon's Far North region, which borders Nigeria, has seen a resurgence in attacks blamed on Boko Haram after months of relative calm.

Six civilians were killed in mid-June in a double suicide attack in Kolofata, and two others died in Limani at the start of last month when a female bomber blew herself up near the town's public school.

Some 200,000 Cameroonians from the Far North region have fled their homes in fear of the violence.