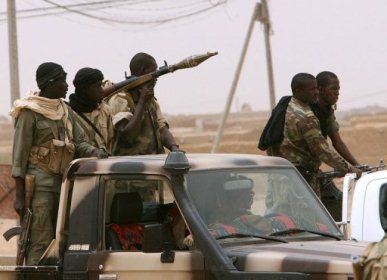 The Malian army said Friday it had killed a top jihadist commander operating in the country's troubled central region, following heavy fighting in the north against jihadists and among armed groups this week.

Bekaye Sangare, a senior figure in the Macina Brigades, a group that joined a powerful jihadist alliance formed in March, was killed in the town of Mougna by Mali's National Guard, a military source told AFP.

Sangare was behind "several attacks in the area against police and customs checkpoints," the same source said, specifically along the porous border with Burkina Faso on July 8 and 9.

Sangare's death follows the killing of a dozen jihadists this week by joint Malian-French forces in the troubled north, while an attack by Islamists on Malian soldiers dead left three troops dead and five more still missing.

The French army said in a statement Thursday that fighting "took out several terrorists in the Gao-Ansongo region," between July 10 and July 12, requiring helicopter and drone cover.

Elsewhere, non-jihadist armed groups faced off in the region of Kidal on Tuesday, violating a ceasefire as they battled for control around the Anefis area, which they have fought over for two years.

Mali's north is controlled in parts by armed groups loyal to Bamako and in others by former rebels who want greater autonomy for the region, while the state is absent from much of the territory.

Head of the United Nations peacekeeping mission in the country Mahamat Saleh Annadif noted that the clashes between the Gatia pro-government group and the former rebels of the Coordination of Movements of Azawad (CMA) took place as a committee aimed at enforcing a peace accord was in session.

Both sides signed a 2015 peace deal aimed at curbing violence in Mali's north, but both have repeatedly violated a ceasefire.

Several of the peace deal's key planks have yet to be fully implemented, while jihadists continue to roam the north and center of the country, despite being ousted from key northern towns by an ongoing French-led military intervention in 2013.