'Freedom' Steak on Menu at 'Le Dictateur' in Tunis 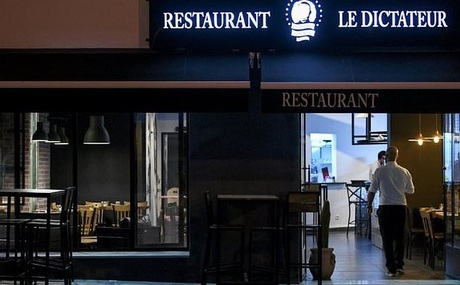 A steak dubbed the "Grilled Freedom" is just one stand-out dish on the menu of the Tunisian capital's "Le Dictateur" restaurant, which is not exactly to the taste of officialdom.

Six years after the North African country's revolution that sparked the Arab Spring, "Le Dictateur" vies for the foodie business in the upmarket Cite Ennasr suburb of Tunis.

"We had to make ourselves known, to come up with a name and concept that attracted attention because good cuisine alone is often not enough," said owner Seif Ben Hammouda.

"Dictatorship was a taboo subject for decades, and it's still very relevant here as efforts continue to bring about freedom and democracy," said the savvy entrepreneur in his 30s.

Against a bricked background, portraits that include Charlie Chaplin aping Adolf Hitler are mounted behind cages on the walls, creating a prison-like atmosphere.

Joseph Stalin and Melania Trump, wife of the US president, compete for space in murals on other walls, as a picture of Russian President Vladimir Putin also looks down on diners.

The oppressive theme extends to the menu, with signature dishes such as "Grilled Freedom", "Anarchy", "Opposition" and "Putsch" on offer.

"I wanted to take full advantage of the freedom of expression that's been the main achievement of the revolution," said the restaurateur, who returned in 2008 from France where he studied marketing and management.

But he still waited for several years after the 2011 fall of Tunisian dictator Zine El Abidine Ben Ali before beginning his bold culinary venture.

- Scrutinised by officials -Only last March did the restaurant open its doors under the daring name and logo of a figure resembling North Korean leader Kim Jong-Un but also sporting a Hitler moustache.

The Tunisian authorities were "very much disturbed", Ben Hammouda told AFP, and a wave of municipal and even some state officials descended on "Le Dictateur" to check it out.

The reasons they gave were that his paperwork and the hygienic conditions on the premises had to pass muster.

However, Ben Hammouda was also directly asked to change the establishment's name and logo -- "to avoid problems", as he was advised by one minister.

The project was all considered "a bit shocking", Ben Hammouda said.

But the fuss that was whipped up in the media only served to advertise "Le Dictateur" and bring in a stream of curious punters.

"The first time I came was to see what it looked like, this 'culinary dictatorship' that was so upsetting the authorities," said Malek.

He spoke as he was about to tuck into a "Citizen" salad and "Salazar" pasta named after Portugal's late dictator, Antonio de Oliveira Salazar.

"Le Dictateur" was eventually given permission to keep its bold restaurant sign, after a compromise was struck in which the Kim-lookalike logo was stripped of its toothbrush moustache.

"I'm enormously thankful to the authorities for all the free publicity," said Ben Hammouda, who stressed that the quality of the food remained his priority.

Hungry first-time visitor Chawki was eager to find out if the fare on offer lived up to the hype.

"Thinking about these dictators can put you off your meal. But let's hope the food is good," he said.