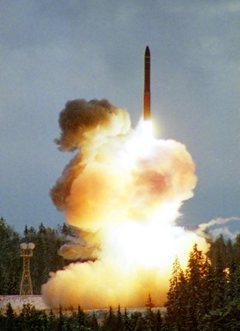 Iran dismissed intimidating remarks by its own officials against Turkey saying Tehran would target NATO's missile shield in its neighbor if threatened, the state-run Anatolia news agency reported Wednesday.

"We reject those views completely," Iranian Foreign Minister Ali Akbar Salehi told Anatolia in an interview, adding that those who had made the irresponsible statements had been warned.

"The Islamic Republic of Iran's official stance on Turkey is based on deep brotherhood and friendship," he said, adding that only Iran's supreme leader, president and foreign minister were able to pronounce on Iran's official attitude on international matters and foreign policy.

"Other statements are considered personal views," he said.

In November, the commander of the aerospace division of Iran's Revolutionary Guards said Tehran would target NATO's missile shield in neighboring Turkey's southern Malatya province if it were threatened by military action.

"We are prepared to first target the NATO defense missile shield in Turkey if we are threatened. And then we'll move on to other targets," Amir-Ali Hajizadeh was quoted as saying by the Mehr news agency.

Earlier this month, an Iranian member of parliament, Hussein Ibrahimi said it was Iran's "right" to hit the missile shield. "Iran will definitely do that," Turkish media quoted Ibrahimi as telling Iranian daily Sharq.

Turkey in December conveyed its concern about the remarks of the Iranian commander to Salehi.

Turkey last year has agreed to host an early warning radar system in its southeast as part of NATO's shield which the United States says is aimed at thwarting missile threats from the Middle East, particularly Iran.

Turkish officials insist that the shield targets no specific country.

@bigdig: Keep licking the Syrian boots day in and day out. Go read some history again as I assume you failed the high school history classes when Turkey owned the middle east prior to the British/French invasion. I'll just say history will repeat itself if your allies (Syria and Iran) mess with Turkey.

Turkey can beat the crap out of Iran in a war, not to mention that it's a member of NATO so all of NATO would come to its defense.

How did Turkey change their rhetoric towards Syria? Last i checked deals were being cancelled by both sides, economic sanctions were being placed against Syria.
Predator, stop insulting bigdig, it seems like he is more than a mouthpiece but an insider to deals and events that supposedly only the "political elite" know.
Share with us more of your wisdom.lol.

If Iran hits NATO installations, it will be reduced to a parking lot