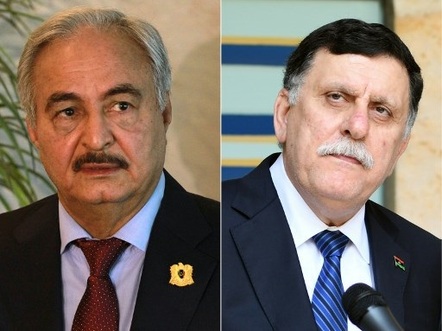 The two main rivals in conflict-ridden Libya agreed Tuesday to a ceasefire and committed to holding elections that French President Emmanuel Macron said would take place in spring 2018.

Macron said Libya's U.N.-backed Prime Minister Fayez al-Sarraj and Khalifa Haftar, the military commander based in the east of the vast country, had shown "historic courage" in talks outside Paris.

"Today Prime Minister Sarraj and General Haftar can become the symbols of national unity and the commitment to reconciliation and peace," the French president said after hosting the meeting.

Libya has plunged into chaos since the overthrow of longtime strongman Moammar Gadhafi in 2011 with dozens of armed factions filling the power vacuum.

Haftar has refused to recognize the authority of Sarraj's Government of National Authority (GNA), based in the capital Tripoli.

In Tuesday's talks, the two leaders accepted that only a political solution can end the crisis, starting with a ceasefire.

In a 10-point statement released after the meeting, the two leaders said: "We commit to a ceasefire and to refrain from any use of armed force for any purpose that does not strictly constitute counter-terrorism."

They also say the two sides are committed to "building the rule of law", and integrating fighters into "lawful military forces."

The meeting went further than talks in Abu Dhabi in May which ended without either side backing any commitments, but huge obstacles remain.

The key challenge to restoring stability is to set up a unified central government with a single army and police force.

Macron said bringing peace to Libya was essential for Europe to end the flow of refugees through the Mediterranean.

"If we do not succeed in this process, the consequences on our countries will be direct in terms of the terrorist threat and the migratory effects that such a failure would have," the French leader said.

Although the communique did not stipulate a date for elections, Macron said Sarraj and Haftar had "struck an agreement to hold elections next spring."

Sarraj had "done everything... to launch the construction of a Libyan state armed with effective and respected institutions," he said.

But a "new impetus" had been needed because "political divisions and military rivalries threaten to reduce these efforts to nothing," he said.

France, under then president Nicolas Sarkozy, was one of the Western nations that pushed hardest for the NATO air strikes that hastened Gadhafi's demise.

Former U.S. president Barack Obama was highly critical of that intervention in Libya.

Jihadists have profited from the turmoil, seizing the Mediterranean coastal city of Benghazi three years ago, although Haftar's forces drove the extremists out earlier this month.

There was some skepticism from diplomats involved in the talks about whether the military strongman was prepared to share power.

"We have to hope that when he signs something, he will keep his word," the source said, speaking on condition of anonymity.

Human Rights Watch said it was watching the talks closely after a video appeared on social media this week showing the execution of 20 blindfolded and handcuffed people in orange jumpsuits, reportedly by members of the self-styled Libyan National Army (LNA) commanded by Haftar.

Eric Goldstein, Middle East and North Africa deputy director for Human Rights Watch said, if confirmed, the executions were "yet another manifestation of how (the LNA's members) are taking the law into their own hands in the absence of accountability and rule of law."

The rights group called for those accused to be removed from active duty and held accountable if found guilty.

Human traffickers have exploited the chaos in Libya to boost their lucrative but deadly trade, and the country has this year become the main springboard for migrants seeking to reach Europe in often flimsy and overloaded boats.

Since January, more than 100,000 migrants have made the perilous voyage from Libya, with 85,000 arriving on the shores of Italy, according to the International Organization for Migration.

About 2,360 people have drowned this year attempting to make the journey, the IOM says.

Rescuers said Tuesday they had discovered 11 bodies including those of pregnant women in a dinghy off the Libyan coast.