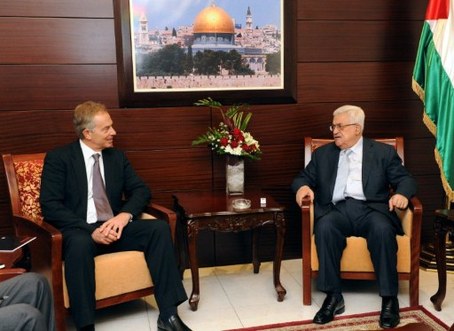 Members of the international peacemaking Quartet appeared to make little progress on Wednesday after separate talks with Israeli and Palestinian officials in a bid to kick-start stalled peace talks.

Envoys and Quartet representative Tony Blair "stressed the important objective of a direct exchange between the parties without delay or preconditions," a statement from the diplomatic grouping read.

The envoys, representing the United Nations, Russia, the United States and the European Union, met the Palestinian team headed by Mohammed Shtayeh in the morning at the U.N. headquarters in east Jerusalem, and the Israelis at the same place in the early afternoon.

Speaking to Voice of Palestine radio ahead of Wednesday's talks, Palestinian negotiator Saeb Erakat said that Ramallah's stance "had already been presented to the Quartet" and it was now the Quartet's turn to answer the questions they had posed during their last meeting on November 14.

But Mark Regev, Israeli Prime Minister Benjamin Netanyahu's spokesman, put the onus of the impasse on Erakat, who Regev said not only refused a recent Israeli proposal to meet directly with his counterpart Itzhak Molho, but also did not attend the Wednesday meeting.

"If the Palestinians continue to boycott the negotiations, this will raise severe questions about their sincerity and commitment in reaching a negotiated solution," he told Agence France Presse.

There was little progress to report after the November meeting either, with the envoys saying only that they had "continued to encourage the parties to resume direct bilateral negotiations without delay or preconditions."

Direct Israeli-Palestinian talks have been on hold for more than a year, grinding to a halt over the thorny issue of settlement construction shortly after they restarted in September 2010.

Last week, the U.S. State Department said its Middle East peace envoy David Hale was going to Jerusalem to further "efforts to get the two parties to put forward concrete proposals and to agree to come back to the table together."

The Quartet laid out a proposal in September aimed at reaching a peace agreement in a year.

But there has been no visible sign of progress, with the Palestinians demanding that Israel halt settlement construction before the talks can resume.

On Tuesday, a coalition of 20 international aid groups and rights organizations published a report detailing a sharp rise in the number of Palestinian homes destroyed by Israel in which they also criticized the Quartet.

"There is a growing disconnect between the Quartet talks and the situation on the ground," said Jeremy Hobbs, executive director of Oxfam International, with similar sentiments expressed by Human Rights Watch.

"The Quartet should call ongoing settlement expansion and house demolitions what they are: violations of international humanitarian law that Israel should stop," said Sarah Leah Whitson, director of the Middle East region at HRW.

Amnesty International took an even stronger line, saying the Quartet's approach was a failure.

"It is time for the Quartet to understand that they cannot contribute to achieving a just and durable solution to the conflict without first ensuring respect for international law," he said.