Army Pounds IS Jihadists for Third Day in a Row 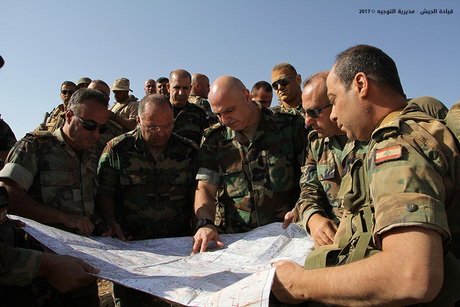 The Lebanese army heavily pounded the hideouts of the Islamic State posts for the third day in a row, as it scored advances in the outskirts of Ras Baalbek and al-Qaa, media reports said on Monday.

The troops have intensified their operations primarily following an attempted suicide attack Sunday that aimed to target their positions on Lebanon's eastern border where the battle rages.

On Monday evening, the army issued a statement saying army units were continuing their bombardment of IS' posts with "heavy artillery and aircraft."

"Direct hits were recorded among the ranks of the terrorists and the vehicles they were using, as the army's Engineering Regiment continued the removal of landmines, traps and explosives from the way of the advancing units," the statement said.

The sound of shelling had resonated throughout Sunday night and continued until dawn.

Army troops shelled the IS positions, amid concerns that jihadists could plan another suicide attack, mainly that the militants have been besieged in more than one position, al-Joumhouria daily reported.

Later during the day, NNA said that army units heavily shelled the remaining IS posts in said outskirts while engineering units scanned the liberated areas for landmines.

The army began its operation in the outskirts of Ras Baalbek and al-Qaa region early on Saturday, and has already recaptured two thirds of the territory in the area, the military said.

The retaken area covers about 80 square kilometers (around 31 square miles) once controlled by the jihadists, the army said.

But an army source warned on Sunday that ousting IS from the rest of the territory would be tough.

A mine blast killed three Lebanese soldiers Sunday while their way to join the offensive to oust IS, the military said in a statement

The army also said soldiers blew up an explosives-packed car and a booby-trapped motorcycle carrying would-be suicide bombers in Ras Baalbek outskirts, preventing an attack on the troops.

Lebanon's battle against IS comes as the jihadist group faces assaults in both neighboring Syria and Iraq, where the government early Sunday announced an offensive on the group's bastion of Tal Afar. It also comes amid a simultaneous anti-IS assault by Hizbullah and the Syrian army on the Syrian side of the border region.

God speed to the LAF.

How many Lebanese generals does it take to hold a topographical map?
If you want to have a constructive conversation, you have to stop using obscure technical jargon like "map".

Good job and thank you USA for supplying munitions

You do know isis has stolen american made weapons too?