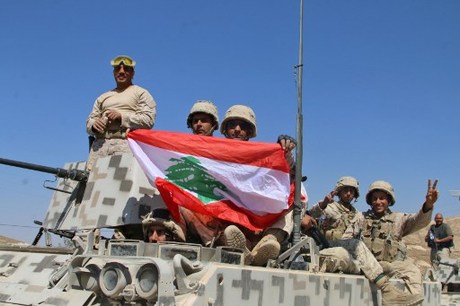 The Lebanese army announced Tuesday that it has launched the third phase of a broad offensive to capture areas controlled by the terrorist Islamic State group on the border with Syria.

After fierce clashes, the advancing units managed to seize control of the strategic Ras al-Kaff and al-Kahf areas.

And as troops scoured Ras al-Kaff for any remaining militants, the engineering units were detonating explosives and traps left behind by the jihadists.

The army later announced that its units captured six new hills in the area and an Army Command spokesman announced that the military was now in control of 100 out of 120 square kilometers of territory previously held by IS.

"Nine terrorist posts were destroyed as arms, ammunition and explosives were seized," the spokesman said.

The spokesman also told reporters that the army does not have any IS detainees from the current battle or any new information about nine troops taken hostage by IS in 2014.

Earlier in the day, the army said in a statement that one of its mine experts, Abbas Kamal Jaafar, was killed and four others were wounded early Tuesday when explosives left behind by the extremists went off as they dismantled them.

The Syrian army and Lebanon's Hizbullah have launched a simultaneous operation to clear IS militants from the Syrian side of the border in the western Qalamun mountain range. Hizbullah has been fighting in Syria alongside President Bashar Assad's forces since 2013.

God is Love and doesn't need weapons to defend Him. Those who take the weapons are mistaken and are commanded by Lucifer.

Remember : They will end up in Hell with him.

Abbas Kamal Jaafar is a true hero and martyr. His mission to dismantle mines put his life at risk every day to defend others. No greater level of courage and sacrifice for a nation. I Hope the army and the nation show proper respect and appreciation for him, his family and his injured comrades.

Patriotic shias are a rare thing nowadays, we must salute his courage and sacrifice and honor his name. The first thing would be to arrest the persons behind da3is, bashar, maliki, and by extension nusraloot.

Yeah, it sure wasn't patriotic when Shias cleansed Lebanon of Nusra al Qaeda terrorists a few weeks ago, right?

of course it DOESN'T count. terrorists versus terrorists. They weren't even following Lebanese instructions as these came from Qom. Zero patriotism in 1 criminal ganging taking it onto another gang, a pure turf war.

Bark all you want, the truth is your Wahhabi brethren are being eradicated from Lebanon.