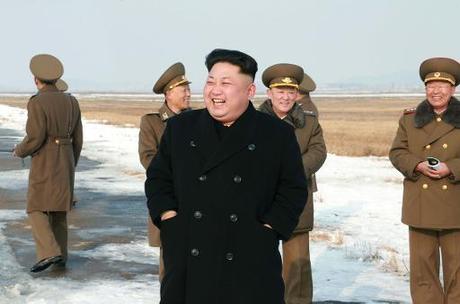 Under Kim, Pyongyang has made rapid strides in its ballistic missile technology, which it is banned from pursuing under United Nations resolutions that have slapped it with seven sets of sanctions.

Last month it carried out two successful ICBM launches, overseen by Kim and apparently bringing most of its sworn enemy the United States into range for the first time.

A series of threats followed from both sides, and while the rhetoric has since eased, the U.S. and South Korea this week kicked off their annual Ulchi Freedom Guardian military drills, which the North always condemns as dress rehearsals for invasion.

The North says it needs nuclear weapons to protect itself against the U.S., and analysts said pictures released Wednesday of Kim's visit to the Chemical Material Institute of the Academy of Defense Science revealed major technological advances and ambitions.

Kim, in a black suit, was shown next to a large brown tube that Joshua Pollack of the U.S. Middlebury Institute of International Studies said on Twitter was a "wound fiber cylinder, evidently a large-diameter solid-rocket motor casing in the making."

It appeared to be made of Kevlar or fiberglass, added independent missile and nuclear analysts George Herbert.

Other pictures carried by the Rodong Sinmun, the official mouthpiece of the North's ruling party, included missile schematics and what appeared to be production processes.

"We have diagrams and names on two apparent new solid fuel multistage North Korean nuclear capable missiles," one of them an ICBM and the other a medium- or intermediate-range device, said Herbert.

Wound-filament casings are significantly harder to manufacture than metal ones but much lighter, giving a missile longer range and the ability to carry a heavier payload for a given distance.

Many of the elements on show were objectives rather than currently existing technology, analysts said, but even so Jeffrey Lewis, of the armscontrolwonk.com website, noted: "It's all bad."

"If I understand North Korean propaganda, this is their way of telling us what we'll see in the air in the coming year."

The Academy of Defense Sciences develops the North's missiles, and the official Korean Central News Agency reported that Kim said it was "the pride of our Party to have such unassuming heroes."

"He instructed the institute to produce more solid-fuel rocket engines and rocket warhead tips," it added.

Questions remain whether the North has mastered the technology needed to ensure a ballistic missile warhead survives the intense heat generated by re-entering the Earth's atmosphere.

But it says it has done so, and the KCNA report said the nosecones and engine jets were made of "carbon/carbon compound material."

In recent weeks the North has threatened to fire a salvo of missiles toward the U.S. Pacific territory of Guam, but has since backed away from the plan and tensions have eased.

U.S. Secretary of State Rex Tillerson on Tuesday added momentum to tension reduction, praising the North for showing a "level of restraint" in not conducting nuclear or missile tests since new U.N. sanctions were imposed.

He also expressed hope that it was a sign of Pyongyang's readiness to enter peace and disarmament talks with Washington "sometime in the near future."

Wednesday's North Korean reports were largely factual and made none of their habitual threats of "catastrophic consequences" of military confrontation between it and the U.S.

"Through today's report, the North is touting its capability of manufacturing Hwasong-14 missile's re-entry vehicles and boasting of its preparedness to launch a submarine launched ballistic missile with a larger caliber, Pukguksong-3," Lee Chun-Geun of South Korea's Science and Technology Policy Institute told AFP.