After Deal, IS Allowed to Leave Syria-Lebanon Border Area 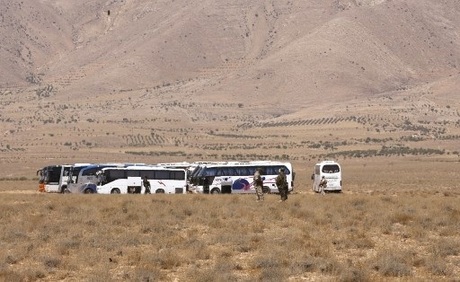 Islamic State militants and their families began leaving a border area between Lebanon and Syria on Monday as part of a controversial negotiated deal with the extremist group to end its presence there, Lebanese and Syrian media reported.

An unidentified number of militants and their families headed in buses toward a town held by the Islamic State group in far eastern Syria, near the border with Iraq. The evacuation will effectively end the presence of jihadist militant groups on the border, after al-Qaida-linked fighters evacuated earlier this month.

The transfer comes nearly a week after the Lebanese army launched a military campaign to drive IS from the rugged mountainous area along its border with Syria.

The Syrian army and Lebanon's Iran-backed Hizbullah, which has been fighting alongside President Bashar Assad's forces in Syria since 2013, have been waging their own separate but simultaneous offensive to pressure IS on the Syrian side of the border.

Nearly two dozen buses and 11 ambulances carried the militants and their families Monday from the area straddling the Syria-Lebanon border toward the IS-held town of Boukamal in eastern Syria.

Syrian Al-Ikhbariya TV reported that there were about 250 militants in the transfer. The Central Military Center, a media outlet run by Hizbullah, said ambulances ferried 25 IS wounded fighters from the area.

The Lebanese military on Monday took journalists on a tour of areas along the border near Ras Baalbek that were recaptured from IS in the past week. Soldiers, tanks and armored vehicles were heavily deployed along the border area, and caves used by IS bore signs of damage from the recent fighting. About 5,000 Lebanese soldiers took part in the offensive.

A senior Lebanese military official said a number of militants were also leaving from the Lebanese side of the border, to be transferred with the Syrian convoy. The official, who spoke on condition of anonymity because he is not part of the negotiations, did not have a number for militants leaving Lebanon.

The transfer of the militants is part of a deal that came into effect following negotiations, led by Hizbullah, to determine the fate of nine Lebanese soldiers who were kidnapped in 2014.

On Sunday, the Lebanese army, on one side, and Hizbullah and the Syrian army on another, declared separate but simultaneous cease-fires. Shortly afterward, the remains of seven soldiers were located and exhumed in an area near the border with Syria. The corpse of an eighth soldier is yet to be located amid reports that a ninth soldier had defected to IS. The bodies of five Hizbullah fighters killed while fighting the militants were also handed over, allowing for the transfer of militants.

The Lebanese government and Hizbullah both cast the evacuation deal as a victory and a capitulation by IS but many in Lebanon, particularly the families of the dead soldiers, were bitterly opposed to the deal, which they said allowed their sons' killers to leave in air-conditioned buses back to Syria.

Al-Ikhbariya said the Syrian government approved the transfer of militants to Boukamal to facilitate the talks over the fate of the soldiers.

The U.S-.backed Lebanese army denies coordinating its operation with the Syrian army.

Once the last of the militants depart, the border area will be free of insurgents for the first time since the early days of the Syrian civil war, which began in 2011. The clearing of the area also secures the strategic highway between Damascus and Homs, Syria's third largest city.

Why didn't the LAF finish them off? they're playing in Assad's game by maintaining them alive and will be used in future terrorist attacks. Michel Aoun, Saad Hariri, and Joe Aoun are either incompetent, weak, or traitors. either way they need to be disposed off ASAP.

They are incompetent and servants to Ebola.