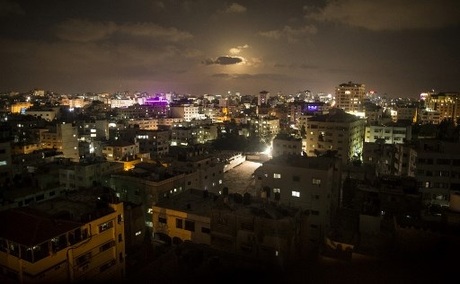 Once a day, the electricity comes on and the Ahmed household whirs into action -- even if it's the middle of the night.

Niveen starts the washing machine, her youngest son plugs in all the phones and computers to charge, her daughter runs to switch on the water heater, and her other son rushes to get his fix of television.

Such is life in the Gaza Strip, where residents have been receiving only three or four hours of mains electricity a day.

The power can come on in the heat of the day or in the middle of the night, but whenever it does, people rush to get things done.

"Tonight the electricity came at 10 pm. In a few days it will move to after midnight," Niveen, 39, told AFP. "It's no longer tolerable."

Over the past three months, the already energy-sparse coastal enclave has seen its electricity crisis worsen.

U.N. Secretary General Antonio Guterres, on his first visit to Israel and the Palestinian territories, will see the crisis for himself when he travels to Gaza on Wednesday.

A long-running feud between Palestinian President Mahmoud Abbas' Fatah and Hamas, the Islamist movement that runs the Gaza Strip, has led to further cuts in electricity supplies.

More than two million Gazans, already dealing with a crippling Israeli blockade and a mostly closed border with Egypt, have to get by on three or four hours of mains power a day, in shifting and erratic cycles.

When power comes, no matter what time, she and her husband rush to bake bread with an electric oven.

"I used to make 200 loaves to cover the family for days, but now I can only do around 30," she told AFP. "There is no power to keep the bread cold."

Her husband recalls a worker who agreed to work flat-out to fix some bathroom tiles while the power was on, despite searing heat.

"He tried to use every minute of it. We are trying to take advantage of every minute," he said.

The crisis has both long and short term causes.

Israel has imposed its blockade on Gaza for a decade, arguing it needs to rein in Hamas, with whom it has fought three wars since 2008.

Israeli restrictions on imports of materials and equipment, as well as the blockade's economic impact, have dramatically cut Gaza's capacity to generate power, rights groups say.

On top of that, key infrastructure, including Gaza's sole power station, has been severely damaged during those conflicts.

In recent months, Abbas, based in the occupied West Bank, has also sought to squeeze Gaza in order to isolate longtime rivals Hamas.

Abbas has reduced the amount of electricity the Palestinian Authority pays Israel to deliver to Gaza, pushing already limited electricity supplies to as little as two hours a day.

Despite Egypt in July beginning to import fuel into Gaza to help supply the strip's sole power station, the shortages remain severe.

While richer Gazans pay for private generators, many cannot afford to do so.

Gaza has 45 percent unemployment and more than two-thirds of the population rely on humanitarian aid.

Mahmoud al-Balawi, who owns a launderette west of Gaza City, has long given up the idea of choosing when he works.

On one recent morning, he arrived at work at 3:00 am, as that was when the power was due to come on.

"I have a lot of clothes for my customers. I want to protect my livelihood but it depends on electricity," he said.

"Last Friday I was with my family far away but my neighbors called to tell me the power had come at an unexpected time. I left them and went to the shop."

"It's a cost that needs to be borne by my customers but most of them won't accept it," he said.

Abdullah Zaqout, also from the Shati refugee camp, has to pay for electricity to look after his sick 67-year-old father, who suffers from severe asthma.

The family need constant electricity to run his nebulizer, a kind of inhaler he uses to take his medicine.

"He needs treatment every two hours. I had to invest in a private generator."