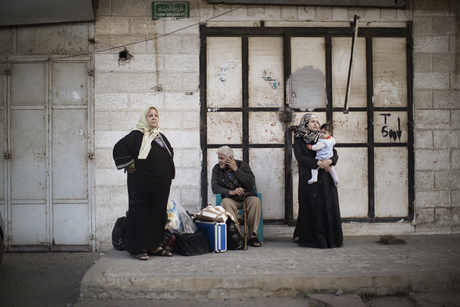 U.N. chief Antonio Guterres called for the blockade of Gaza to be lifted Wednesday as he visited the Palestinian enclave enduring "one of the most dramatic humanitarian crises" he had seen.

The secretary general's comments came as he wrapped up his first visit to Israel and the Palestinian territories since taking office.

Repeatedly throughout the visit he has called for a two-state solution to the Israeli-Palestinian conflict, long the focus of international diplomacy but currently under threat.

On Wednesday in Gaza, Guterres said he had been struck by humanitarian conditions in the overcrowded and impoverished enclave, where an electricity crisis has worsened and clean water is lacking.

"I am deeply moved to be in Gaza today, unfortunately to witness one of the most dramatic humanitarian crises that I've seen in many years working as a humanitarian in the United Nations," Guterres said.

He later said it was "important to open the closures," in a reference to Israel's decade-long blockade of Gaza and its border with Egypt that has remained largely closed in recent years.

Guterres made the comments at a school run by the U.N. agency for Palestinian refugees, UNRWA, in the northern Gaza Strip.

At least 70 percent of Gazans are dependent upon international aid. UNRWA plays a major role in the strip, with the same percentage of the population classified as refugees.

Palestinian militants in Gaza and Israel have fought three wars since 2008.

Israel says the blockade is necessary to keep Islamist movement Hamas, which runs the enclave, from obtaining weapons or materials that could be used to make them.

Hamas welcomed Guterres' trip, calling on him to make "all efforts to lift the siege on the strip and end the suffering for two million Palestinians living in the largest prison in the world."

U.N. officials' contact with Hamas is limited, with the group considered a terrorist organization by the United States and the European Union.

Demonstrations also occurred during Guterres' visit to the strip.

At one protest, around 25 people held a fake coffin with a sign that said "Welcome to the largest prison in the world".

Dozens of people also demonstrated as Guterres' convoy crossed the border with Israel into Gaza, calling for action in support of Palestinian prisoners held by Israel. They included prisoners' relatives.

Before crossing into the Gaza Strip, Israeli officials gave Guterres a tour of the Gaza border area and he was shown a tunnel crossing from the Gaza Strip into Israel.

Such tunnels, used by Hamas for attacks in the past, are a major concern for Israel.

Guterres held talks with Israeli and Palestinian leaders in Jerusalem and Ramallah on Monday and Tuesday and gave a speech in Tel Aviv later Wednesday. He was due to depart later in the day.

His trip was meant in part to express strong support for the imperiled two-state solution to the Israeli-Palestinian conflict.

Israeli Prime Minister Benjamin Netanyahu heads what is seen as the most right-wing government in his country's history, and has signaled he has no intention of evacuating settlements in the occupied West Bank.

Israeli settlements are built on land the Palestinians see as part of their future state.

Prominent members of Netanyahu's government advocate annexing most of the West Bank, which would make an independent Palestinian state impossible.

U.S. President Donald Trump has said he wants to reach the "ultimate deal", but he himself has cast doubt on the two-state solution, saying he could support a single state if this meant peace.

His Fatah party, based in the West Bank, also remains deeply divided from Hamas.

"Guterres made the comments at a school run by the U.N. agency for Palestinian refugees, UNRWA, in the northern Gaza Strip."
I hope they also showed him the weapons they store underground within the school grounds for their Hamas masters.

Although I despise hamas, they're only defending their territory. Are their smarter ways to do it, obviously. Unlike Hizbaloot, they're fighting in their country for their country although they also terrorize Palestinians who disagree with their Islamic radicalism.