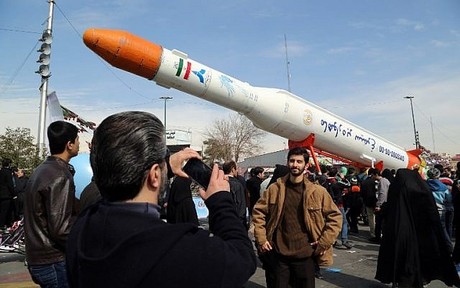 Iran's on-off space programme has received a boost after a recent satellite launch was seen to annoy Washington, with Tehran dusting off plans for a manned mission, perhaps with Moscow's assistance.

"Ten skilled pilots are currently undergoing difficult and intensive training so that two of them... can be selected for the space launch," the head of the science ministry's aerospace research centre, Fathollah Omi, told the state broadcaster last week.

He said the plan was to put humans into suborbital space "in less than eight years".

"In preliminary talks with Russia's main space company, we have agreed to cooperate on this important project and we are waiting for their definitive answer."

Russia has not confirmed the talks, although deputy prime minister Dmitry Rogozin, who oversees its space programme, visited Tehran two years ago to discuss potential collaboration.

The Islamic republic's scientists are also celebrating the fact that two monkeys they fired into space in 2013 have recently given birth to their first baby.

"Aftab and Fargam were two monkeys sent separately into space and returned alive. Researchers are studying the effect of a space trip on their baby," said Omi.

Iran's space programme has progressed in fits and starts.

It has sent a turtle, mouse and worms into space, and after the successful voyage by the monkeys, then-president Mahmoud Ahmadinejad announced he would like to be first to go up on an Iranian rocket.

But he was out of office a few months later, and the whole programme appeared to have been mothballed earlier this year due to financial constraints.

"It was estimated that putting a man into Earth orbit would cost around $15 billion to $20 billion over 15 years. As a result, the budget cannot be allocated for this project," the deputy head of Iran's Space Organisation, Mohammad Homayoun Sadr, said in May.

- 'We can do it' -That decision appears to have been reversed in the wake of the international furore over Iran's testing of a new satellite launch rocket in July.

The 500-kilometre (312-mile) range rocket -- named Simorgh after a bird from Persian legend and with the words "We can do it" inscribed on the side -- was launched from the newly inaugurated Imam Khomeini Space Centre in Semnan province.

Omi confirmed the plans for human spaceflights, as well as a new 1,000-kilometre-range satellite-rocket had followed the "great reaction from the world" to the Simorgh test.

"The Islamic Republic reacts very negatively when it feels it is held back," said Adnan Tabatabai, an Iran analyst and CEO of Germany's CARPO think tank.

"Iran's nuclear programme and particularly its research and development became all the more prestigious and important the more that Iran was under pressure by the West to halt it," he said.

Iran's four launches of domestically produced satellites since 2009 have all sparked condemnation from the West.

"You send orbital satellite carrier rockets into space, and all of a sudden you see they have created uproar about it in the world," said supreme leader Ayatollah Ali Khamenei in August.

"It is a task which is necessary for every country and which is completely normal and ordinary."

The controversy appears to have re-energised the space programme, which is run by the defence ministry.

"Its leaders like to literally show that the sky is the limit to Iran's technological progress," said Tabatabai.

"And that safeguarding revolutionary ideals and religious ideology can be reconciled with modernity."