How Spain Could Suspend Autonomy in Catalonia 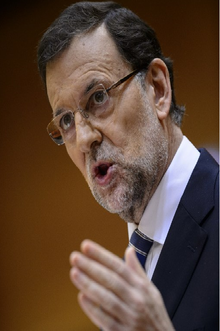 Spain's vow Thursday to take over at least part of Catalonia's regional powers due to its drive for independence would involve triggering the never before used Article 155 of Spain's constitution.

Here are five points about this so-called "nuclear option", which opens the way for Madrid to suspend some or all of the region's autonomy in Spain's worst political crisis in decades.

It said that 90 percent of people who voted backed independence, but turnout was only 43 percent.

After Catalonia's regional president Carles Puigdemont defied various warnings and deadlines from Madrid, the national government said on Thursday it would push ahead with Article 155.

- What does the constitution say? -

Under its constitution adopted in 1978, Spain is one of the Western world's most decentralized nations.

Its 17 regions have varying degrees of control over issues such as education and healthcare.

Catalonia is among those with the most autonomy.

Article 155 says that if a region's government breaches its constitutional obligations or "acts in a way that seriously threatens the general interest of Spain", Madrid can "take necessary measures to oblige it forcibly to comply or to protect said general interest."

- How does the process work? -

The central government called a crisis cabinet meeting for Saturday to discuss the procedure.

It will then have to send to the Senate a list of specific actions it plans to take under Article 155.

The steps will be debated by a Senate committee before a final plenary vote, said Antonio Barroso, analyst at think-tank Teneo Intelligence.

The whole procedure would take about a week.

- What action could Madrid take? -

Article 155 would allow the central government to "take control of political and administrative institutions of the rebel region", Teresa Freixes at the Autonomous University of Barcelona told AFP.

Javier Perez Royo of the University of Seville said measures could include "suspending the regional government, placing the (Catalan police force) Mossos d'Esquadra under the orders of the interior ministry" and even "closing the regional parliament".

Madrid has also proposed regional elections in Catalonia to overcome the political impasse. Puigdemont did not respond to that suggestion on Thursday.

Article 155 is just one of several options Rajoy has in seeking to head off Catalonia's separatists.

The government could declare a state of emergency with limits on freedom of movement and assembly, said Jose Carlos Cano Montejano, a law expert at Madrid's Complutense University.

Other legislation signed in 2015 could allow Madrid to declare a national security crisis and claim powers such as passing laws by decree.

The government can also let a series of criminal cases which have been opened against Catalan leaders run their course.

prision without any mercy to that jacobs of allah...the army must enter in Catalonia and assume the control of that region...jacobs the allah...155 now!!!