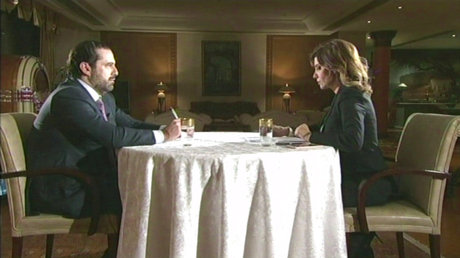 When Prime Minister Saad Hariri announced his resignation in a televised speech from Saudi Arabia last weekend, it stunned Lebanon and created a mystery that lasted for more than a week. On Sunday, another TV appearance by Hariri was filled with bizarre moments.

The Nov. 4 resignation triggered a political crisis in Lebanon, along with rumors about whether Hariri was under house arrest or being coerced to quit. Although he met with various ambassadors in the Saudi capital of Riyadh in the days that followed, no one in Lebanon was really sure what was happening to him.

A much-awaited live interview was done with Hariri on Sunday night by Future TV, a channel associated with his political party. It sought to dispel those rumors, but also raised some new questions.

At one point during the interview, Hariri's eyes were wide open, moving to the back of the room. The camera caught a man in the back corner, behind the interviewer, who was holding what appeared to be a rolled paper. The man, whose face was outside the frame, soon disappeared but not before the camera moved back to Hariri, who was staring toward him with an angry and disgusted look. On Twitter, some Lebanese shared clips of the video and wondered if the man in the back had some kind of message for Hariri, fueling reports that the prime minister was being held against his will. Hariri and the interviewer, Paula Yacoubian, realized the moment was caught on camera. Hariri explained after the break that the man was one of his staff, telling him of the latest developments in Lebanon.

- TIRED AND NEAR TEARS -

After a belligerent resignation speech on Nov. 4, Hariri looked sad and tired on Sunday, at times holding back tears in the interview that went on for over an hour. He repeatedly drank water, finishing his glass and asking for more, prompting Yacoubian to hand him her own glass of water. He pleaded with her to finish the questioning after an hour has passed. "You made me tired," he said. He repeatedly said he was ready to die for Lebanon -- his father, former Prime Minister Rafik Hariri, was killed by a car bomb in Beirut in 2005 -- but he added that he didn't want his children to go through that kind of ordeal. When asked about reports that he is not communicative and doesn't use his phone much, he said: "I am in a reflective state," adding that he didn't want any distractions amid a very busy schedule. His demeanor triggered a new hashtag, #UnderPressure, reflecting that people were unconvinced he was a free man.

The Future TV channel had asked its viewers to share questions for Hariri under the hashtag #AskthePM in an attempt to dispel reports that the interview was pre-recorded. "I would never say it was live, if it was a recorded episode," Yacoubian said near the end of the interview. Throughout the interview, Yacoubian went to great lengths to prove the interview was live. She first read the time from her phone and then reported to Hariri developments in Lebanon, including street celebratory demonstrations. She also read a British Foreign Office statement on the air. Then, when an earthquake was reported in Iraq and Iran, she referenced it, telling Hariri it was to make sure people believed the interview was live.

Ofcourse Hariri was full of tears, he was forced to say out loud that he wanted to resign, that is very humiliating for a Prime Minister of an sovereign and independent country.

Hariri c'est finil. Their clan is over, so is Future/Mustaqbal. The people demand tough leadership, a PM with iron fists that will punch Hizbalot and its syrian/Iranian bosses out of lebanon. Had they let Bahaa Hariri take his father's succession, Lebanon would have been in better shape today. Khalas, it's over c'est finil.

offcourse...the Saudis finance Mustaqbal !!! when they arrested Hariri, the Prime-Minister of Lebannon, the message to Mustaqbal was clear...they want a new leadership to sect sunni more radicalizated, the Daesh of Tripoli must control the Mustaqbal...

you don't need a leader who is the son of X or Y. You need a leader elected by the people on his own merits. Saad Hariri is not a leader to be proud of neither is any other so-called leader in Lebanon.

I mean no offense but the guy is a joke.

Absolutely Barrymore, it's time to close the current chapter and open a new one with smart, courageous, determined people.

No offense, but Hariri has much in common with Aoun, when they fear for their lives, they run away!

He pleaded with her to finish the questioning after an hour has passed. "You made me tired,"

yeah, dramatize it as if we did not watch the interview!!! The man mentioned it once and now it is reported " he pleaded with her"