Jumblat Urges Talks on Dissociation Policy and Not on Hizbullah Arms 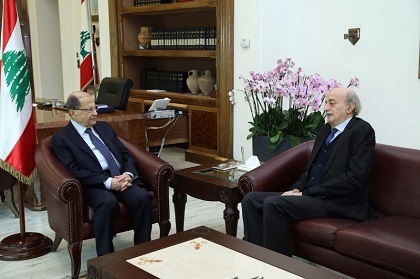 Progressive Socialist Party leader MP Walid Jumblat noted Monday that talks over Hizbullah's arms would be “futile” during this period, calling instead for consultations over the implementation of Lebanon's so-called dissociation policy.

“It would be better and wiser that we don't call for consultations over the issue of arms, seeing as a debate over arms would take us back to the previous dialogues that were held in 2006 under the sponsorship of Speaker Nabih Berri and later under the sponsorship of president Michel Suleiman, and this would be a futile move,” said Jumblat after talks with President Michel Aoun in Baabda.

“Let us discuss the dissociation policy and how to implement it,” Jumblat added.

He also stressed the need to address the economy, saying it needs major solutions.

Aoun kicked off Monday morning a series of bilateral consultations in Baabda with the country's political parties, a few days after Prime Minister Saad Hariri announced that he was suspending his resignation pending negotiations over the dissociation policy.

“The consultations will tackle the security situation, the dissociation policy, ties with Arab states, the Taef Accord and the government's situation, and President Aoun will request clear answers on this issues. This also includes the stance on the Israeli threats, including the defense strategy,” Baabda sources told LBCI television.

Hariri had announced Saturday that “there is seriousness in the ongoing contacts and dialogues” and that the other parties seem to be inclined to accept his proposals.

Hariri had caused widespread perplexity on November 4 when he resigned during a TV broadcast from Saudi Arabia, citing assassination threats and blasting the policies of Iran and Hizbullah in Lebanon and the region.

After a puzzling mini-odyssey that took him to France, Egypt and Cyprus, Hariri arrived back in Lebanon on Tuesday and then announced that he was putting his decision to quit on hold ahead of negotiations.

We desperately need Cedar revolution II to get rid of the Iranian occupation army and criminal organization called Hizbollah and also get rid of all those fake M14 leaders like Jumblat, Hariri and Aoun that have compeltely surrendered to Hizb arms and policies that are isolating, bankrupting, radicalising and making Lebanon subservient to criminal regimes. What a shame!

Gebran Sons :
I sign with you on each word.

What a joke, seriously!

Although the dissociation policy is essential to the presidential speech and government policy and Hezbollah keeps pretending to fully stand behind the president and support the government as one of it's components, it is violently against this central policy, debating it is a waste of time and resources.

Jumblat Urges Talks on Dissociation Policy and Not on Hizbullah Arms

yeah, why talk about hezbollah arms because they are nothing to talk about. Traitors!

Can he understand himself???