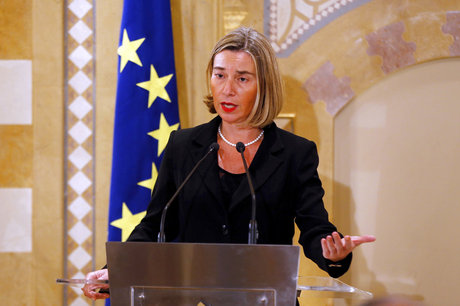 Aoun told the EU official that Lebanon appreciates the European Union's support and hopes its member states will participate effectively in global conferences aimed at supporting the country.

The president also reiterated his call for “a safe and gradual return for refugees to safe areas in Syria,” noting that “there are no indications that there will be a political solution anytime soon.”

Mogherini for her part congratulated Aoun on the role he played during the crisis that followed Prime Minister Saad Hariri's shock resignation from Riyadh, lauding his ability to preserve stability despite the difficult situations.

Following talks with Berri in Ain el-Tineh, the EU official also applauded the Speaker's efforts during the crisis and the national unity that was demonstrated by the Lebanese.

Berri meanwhile thanked the EU over its “stances on Lebanon and the Palestinian cause, particularly Jerusalem,” the National News Agency said.

“Berri and Mogherini expressed identical viewpoints on the importance of achieving a political solution in Syria that would be in the interest of the region and Lebanon,” NNA added.

During talks at the Center House in the evening, Mogherini expressed "satisfaction" at PM Hariri's return to Lebanon and said the EU expects full implementation by Lebanese parties of the so-called dissociation policy, aimed at insulating the tiny country from regional conflicts.

Hariri announced his surprise resignation last month in a bizarre televised address from Saudi Arabia. He has since revoked his resignation following a consensus deal reached with the Hizbullah-led camp to avoid regional entanglements.

At a joint press conference with Mogherini on Tuesday, Hariri emphasized that his priority is to “protect Lebanon and the Lebanese people from the regional flames.”

Hariri later threw a dinner banquet in honor of the European official.

The EU High Representative's second visit this year shows “the EU's strong and long-standing partnership with Lebanon,” the EU Delegation said in a statement.

The European Union will continue to “support Lebanon in meeting the challenges that lie ahead and remains committed to the country's unity, sovereignty and territorial integrity,” the statement added.