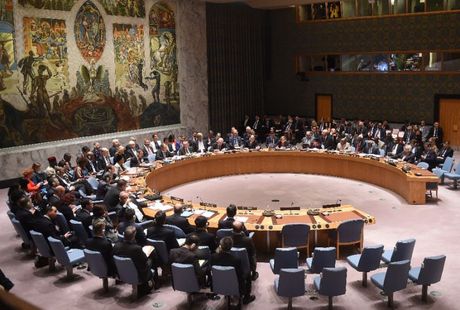 The Security Council issued a statement on Wednesday on the general situation in Lebanon commending PM Saad Hariri's decision to continue his term.

The members of the Security Council commended the convening in Paris on December 8, 2017 of a ministerial meeting of the International Support Group for Lebanon (ISG), chaired by the United Nations and France and attended by Hariri, and the Joint Statement issued at the end of the meeting. They also welcomed previous efforts which contributed to the resumption of the Council of Ministers on December 5, 2017.

Recalling the need to protect Lebanon from the crisis that are destabilizing the Middle East, the Council called upon all regional States and organizations to work for the political, social, economic, and financial stability and security of Lebanon, in full respect of its sovereignty and integrity.

Members of the Security Council called upon all Lebanese parties to implement a tangible policy of disassociation from any external conflicts, as an important priority, as spelled out in previous declarations, in particular the 2012 Baabda Declaration.

They reaffirmed their support for the ongoing efforts of the Lebanese authorities to restore normal functioning of institutions and prepare for holding the legislative elections by May 2018.

They also called upon the government of Lebanon to further accelerate its program of reforms in order to ensure political and economic stability built on a functional, transparent and democratic State, with full participation of both women and men.

Reiterating the need for full implementation of all relevant Security Council resolutions, including resolutions 1559 (2004), 1701 (2006) and 2373 (2017), they commended the role of the United Nations Interim Force in Lebanon (UNIFIL) in maintaining calm along the Blue Line and its cooperation with the Lebanese Armed Forces (LAF) with the aim of extending the control of the Government of Lebanon over all Lebanese territory.

They recalled the proactive steps that UNIFIL has taken to operationalize Resolution 2373 (2017) and encourage UNIFIL to continue these efforts.

Given the security challenges faced by Lebanon, members of the Security Council commended the role played by the LAF and by all security institutions of the State in protecting the country, its borders and its population.

They recalled the importance of implementing previous commitments which require that there will be no weapons other than that of the Lebanese State and called on all Lebanese parties to resume discussions towards a consensus on a National Defense Strategy.

They recalled that the Lebanese Armed Forces (LAF) are the only legitimate armed forces of Lebanon, as enshrined in the Lebanese constitution and in the Taif agreement.

On the Syrian refugee crisis, they commended the generous and long-standing efforts made by the Lebanese people and the Lebanese authorities to host the refugees, recalling that any return of refugees, when conditions allow, must be in full compliance with international law including international refugee law, and with respect for humanitarian principles, and the principle of non-refoulement.

The statement encouraged the international community to continue and increase its support to Lebanon’s political, social and economic stability, including through the appropriate provision of assistance for Lebanese host communities and refugees in Lebanon.