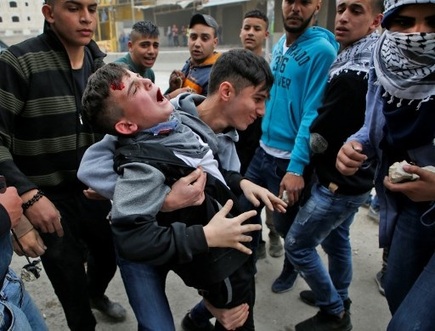 A Palestinian was killed as youths clashed with Israeli soldiers on the Gaza border on Friday in a new protest against US recognition of Jerusalem as Israel's capital, the health ministry said.

"Zakaria al-Kafarneh, 24, died after being shot in the chest east of Jabalia (in northern Gaza)," a health ministry spokesman said in a statement.

Six other Palestinians were shot with live ammunition and one is in a critical condition, the ministry said, as hundreds of protesters clashed with Israeli soldiers at various points along the border.

Nine Palestinians have been killed in violence since US President Donald Trump's December 6 announcement he would recognise Jerusalem as Israel's capital and move the US embassy there.

Seven of them have died in clashes, while two were killed in an Israeli air strike on Gaza.

Fresh anti-Trump protests were taking place in both the West Bank and Gaza on Friday, while minor scuffles broke out after the main weekly Muslim prayers in Jerusalem.