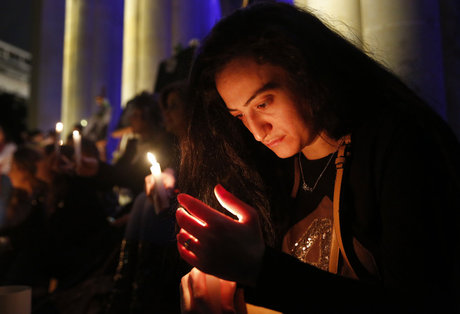 Dozens of people have gathered with candles in Beirut to denounce violence against women after at least three were murdered in Lebanon in less than a week.

The victims included British embassy worker Rebecca Dykes, whom an Uber driver admitted to killing after he tried to sexually assault her last week.

Days before, a 22-year-old was found shot in the chest and her husband was detained, vigil organizers said.

Also during the same week, a woman's son-in-law was held in custody after she was found killed.

A 15-year-old girl was also said to have committed suicide during the week.

In a Facebook post before the event, organizers deplored a lack of "legal, social and political systems" to address what they called "systemic" violence against women, from harassment to murder.

"We reject the normalization of violence against women and justifying it as separate incidents at a time where it's clearly a structural and systemic violence that haunts us in private and public spaces," they said.

They called for "tangible and effective actions" to respect women's boundaries and bodies.

In 2014, Lebanon passed a law making domestic violence a criminal offense, after a years-long campaign by civil society groups.

Too bad most men there look at women as half of what they are. Perhaps not striking them or throwing them off balconies would help? Just a thought. As well, come to the 21st century and not regress to primitive ways. Unfortunately thanks to the culture, the abuse is deemed normal and is blissfully ignored, so let's see if people actually grow up instead of acting like God's gift to humanity while they can't even formulate independent thought.