Riachi Hits Back at Moussawi over 'Civil War' Remarks 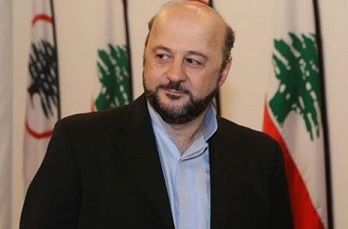 “Someone from the March 8 camp has said that the conflict today is between the advocates of stability and isolated parties that want civil war… Those whom he described as isolated are open to the Arab world and the international community and they are only clinging to stability and legitimate state institutions,” Riachi said in a tweet.

“Meanwhile, those whom he described as advocates of stability are the ones who are exposing Lebanon to the threat of sanctions and blockade while carrying out acts that defy legitimate state institutions,” the minister added.

Moussawi had said Saturday that the March 8-March 14 rift no longer exists and that Lebanon is now divided between a camp “that puts national accord and civil peace above all else” and another “that has expressed its willingness to execute the orders of some regional and international regimes, even if that leads to restarting the civil war.”

“These are an isolated minority and their isolation should be maintained,” the MP added.

He said it is legitimate for Christians to receive half the seats in Parliament (per Article 24 of the Lebanese Constitution) while Christians are perhaps a quarter of the population (no census has been performed since 1932) because and at this point his microphone failed.

Get lost. You keep telling these stupidities.
You must learn these things:
1. It is not because you have weapons that you can dominate.
2. Lebanon was created by the Christians who welcomed their muslim brothers and refused in 1944 to create the small Lebanon without the muslims (read history if you can understand).
3. There are more than 10 million expatriates whom 80% of them are Christians.
4. In your villages you marry several women who bring about 10 children each. Unfortunately they are uneducated (like you) and the world functions with quality NOT quantity. Education is the essence of humanity.
5. You will never ever have an Islamic Republic linked to Iranium because their downfall (and yours) has just started.

6. Do not make the huge error of spreading hatred in Lebanon, because it will return against you.
7. At the present time you have destroyed the living together the most beautiful thing Lebanon had. But, Remember that one day you might need to come back and ask to live with the others. I hope that day you will not be rejected by a partition.

Forget this joker. Is the forum clown

I wonder how a person like u talking about equality can belive that any democratic election can be done when a party has arms, and is able to use them to terify opponents and acts above all laws...
This said, merry christmas to all of you

He is lucky to live in Lebanon and not Iran where his mother and sister could be held by the morality police if their head scarf does not cover their hair. He is lucky he lives in a country where he can voice his misguided opinion without getting arrested by the secret police. Iranians in Lebanon are lucky that they don't live in iran

Merry Christmas to all. Hope you're having a good time. It just started snowing where I am... thet Christmas miracle is happening.

Go live in Israel then whose stopping you.