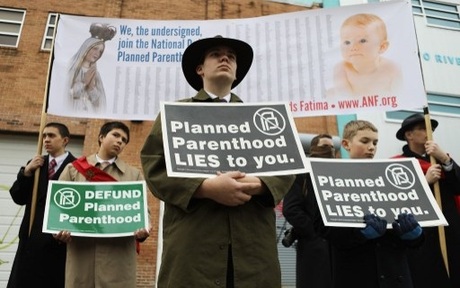 U.S. Senate Democrats blocked a controversial measure Monday that would ban and criminalize abortion after 20 weeks of pregnancy, scuttling a longtime priority of conservatives in Congress.

President Donald Trump described the failure of the Pain-Capable Unborn Child Protection Act as "disappointing," and urged senators to reconsider.

The measure fell short of the 60 votes needed to advance the bill in the 100-member Senate, although it earned a narrow majority in the chamber, 51 to 46.

Congressional Republicans have for years sought to pass legislation that restricts abortion in the United States, despite the Supreme Court's landmark 1973 ruling upholding a woman's right to end a pregnancy.

The bill, which would ban abortions after 20 weeks but provide exceptions for rape, incest and critical health risks to the mother, passed the Republican-controlled House of Representatives in October.

But it faced a higher bar in the Senate, where opponents' blocking tactics can force a 60-vote threshold.

"We may not have the votes this time, but we are advancing the issue, and we're going to continue to fight for the unborn, particularly those who are capable of feeling pain after 20 weeks," Senator Lindsey Graham, the bill's chief sponsor, said in a statement.

"You're on the right side of history," Graham argued to supporters on the Senate floor. "You're where America will be, it's just a matter of time when we get there."

The effort received support from Democrats Bob Casey, Joe Donnelly and Joe Manchin -- three senators up for re-election this year in states won by President Donald Trump in 2016.

"It is disappointing that despite support from a bipartisan majority of U.S. senators, this bill was blocked from further consideration," Trump said in a statement.

"We must defend those who cannot defend themselves. I urge the Senate to reconsider its decision and pass legislation that will celebrate, cherish and protect life."

Conservative groups have pointed to advancements in science that have allowed a small but increasing number of premature babies to survive outside the womb after five months of gestation.

Senator Joni Ernst pointed to the case of five-year-old Micah Pickering, who was born at 22 weeks.

"By any measure, at five months of development, an unborn child is a child," Ernst said on the Senate floor.

"They will scrunch their eyes, they'll clench their hands, they pull back their limbs in response to pain, just like any other child," she said.

Trump, Graham and others noted that the United States is among just seven nations, including China and North Korea, that permit abortions after 20 weeks.

Several Democrats pushed back against the legislation, framing it as a war against access to safe and affordable health care for women.

Senator Dianne Feinstein warned that the bill would weaken protections for women in the case of rape or incest.

"Senate Republicans are bringing up a bill today to undermine a woman's constitutional right to make decisions about her own body," she said on Twitter.