Uprooted, Again: War Catches Up with Syrians in Idlib 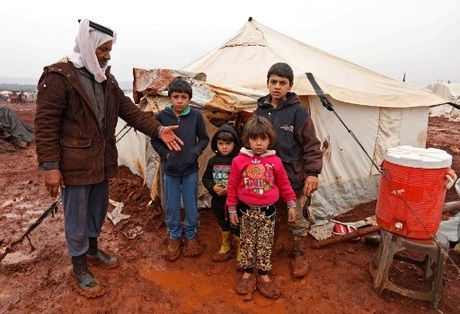 The shabby, mud-covered tent in northwest Syria is the only home Abu Khaled's family has left. Uprooted four times in six years, they say war is practically stalking them.

"As soon as we settle down somewhere for a year or a little more, the bombardment arrives and we change places," says the elderly man, originally from a neighboring province.

The tent where he, his wife, and his 12 children now live is pitched alongside dozens more in Syria's Idlib, the only province that still largely escapes government control.

More than a million Syrians from other parts of the country now live in the northwestern province, after they fled fighting or as a result of negotiated settlements to escape suffocating sieges.

In Idlib, they hoped to find a shred of normalcy and stability -- but since late 2017, the province has been the target of a blistering Russian-backed government offensive.

"I lost my land, my trees, my home. I left my house only with the clothes I had on my back," says Abu Khaled, a native of the neighboring province of Hama.

He fled Hama in 2012, settling in Idlib province.

Battered by rain, the makeshift camp where he now lives outside the town of Sarmada has turned into a massive mud pit.

Rows of tents made of plastic tarpaulins, blankets and curtains are stained with dirt, and chunks of mud are wedged into pairs of shoes piled outside.

Young girls wash a saucepan in a large brown puddle and men slip and slide past the tents.

Rebels and jihadists overran Idlib in 2015. But since then, hardliners have expanded their control and the influence of mainstream rebels has shrunk drastically.

At the same time, the province's population has swollen, particularly with tens of thousands of people -- rebels and civilians -- bussed out of besieged opposition enclaves elsewhere.

Along with his wife and six children, he was bussed out of the town of Daraya near Damascus in August 2016 under a negotiated settlement to end years of crippling government siege.

"It was a day of tears and blood. You're in the bus, you can't speak -- you're leaving your town behind," he recalls.

They settled in Jarjanaz, a town in Idlib province. But a little more than a year later, they found themselves fleeing the government assault on Idlib.

"The strikes started to escalate and people were sending their women and children away. Two rockets and some barrel bombs hit near our house," says Abu Mohammed.

They moved closer to Idlib city in December, now living in a sparsely furnished apartment.

"There's no work here. Jarjanaz had become like our second home -- we knew everyone," says Abu Mohammed, a scarf tied around his head.

In December 2016, the married couple was bussed out of their native Aleppo, Syria's second city, under one of the war's most controversial evacuation deals.

The agreement capped a ferocious month-long government assault on the city and several months of siege, and saw tens of thousands of civilians and rebels evacuated.

In the 13 months since they left Aleppo, Taleb and Abu Qusay have been displaced five times.

"As soon as we start to get settled and can take a breath, there are new strikes and we have to pick up our things and leave," says Taleb.

With tears in her eyes, she clutches her bulging belly -- Taleb is eight months pregnant.

"What will be my daughter's future? Will she be homeless like us, or will she have a better life?" asks the 20-year-old, her voice breaking with emotion.

From their native Aleppo, the couple have kept a few souvenirs: books, a wool cap knitted by Marwa, and a Japanese print hung on the wall of their temporary home.

"I grabbed it from the rubble of a destroyed home in Aleppo," recalls Abu Qusay, dressed in a hooded sweatsuit.

The day they left Aleppo has been frozen in time in a now famous photograph they keep saved on their laptop.

In it, their backs are to the camera, with Marwa leaning into her husband who is carrying an automatic rifle.

They gaze at the remnants of a building heavily damaged in bombardment and clashes. It is tagged with a short Arabic phrase in black graffiti.