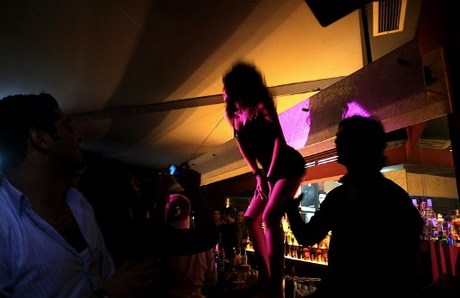 A Beirut nightclub has been shut down on Tuesday by the interior ministry after explicit footage on the dance floor circulating on social media.

“After viewing the video in a nightclub in Beirut on social media showing pornographic show, the Interior Minister asked the Internal Security Forces to investigate the matter and close the nightclub and turn those responsible to the competent judicial authorities,” Mashnouq's media office said on twitter.

The video has circulated over the weekend and drew sharp criticism on social media.

The name of the club was not revealed.

yes blablabla for once you used that lonely one cell in your brain, bravo.

I don't understand why any Muslim or Christian would have a problem with closing down any nightclub? Do you really think ANY Prophet would allow nightclubs? Or would virgin Mary peace be upon her approve of men and women dancing together, drinking and showing their bodies?

Lebanese have killed eachother over religion yet how many actually follow their Prophets teachings in their daily life and in their opinions?

Decide. You can't claim to love God and His Prophet while also being against their rules on how human beings should act. Or is religion only something you use to be against someone else?