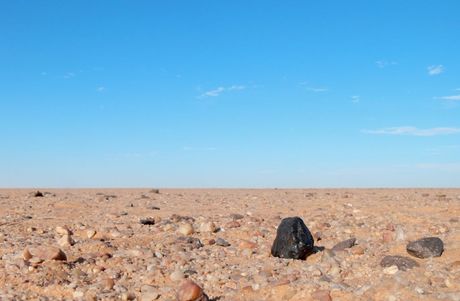 A car-sized asteroid that exploded in Earth's atmosphere in 2008, raining down diamond-bearing rocks, was a fragment of a Solar System planet that existed billions of years ago, researchers said Tuesday.

The parent planet was about as large as Mars or Mercury, and was formed in our Solar System's first 10 million years before being shattered to pieces in collisions with other space rocks, a European team reported.

Using high-definition microscopy, the researchers measured the composition of diamonds locked up in rocks left scattered in the Nubian desert of northern Sudan after an asteroid dubbed 2008 TC3 crashed into Earth.

They concluded the precious stones must have formed at pressures that could only have existed on a long-lost Mars- to Mercury-sized planet.

These are the smallest two planets in our Solar System, which was forged some 4.6 billion years ago.

The measurements provide "the first compelling evidence for such a large body that has since disappeared," the research team wrote in a paper published in the journal Nature Communications.

And it boosts the theory that today's Solar System planets were forged from the remains of tens of large "proto-planets".

The asteroid, whose dramatic collision with Earth in October 2008 had been forecast by astronomers, fell into a category of space rocks called ureilites, which account for less than one percent of objects that hit Earth.

The new study suggested all ureilite asteroids were remnants of the same proto-planet.

Due to their durability, diamonds can trap minerals that were present in their formation environment, allowing scientists to look far back in time.