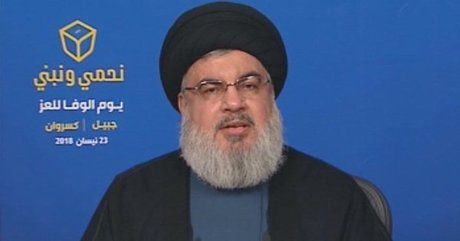 The “key of Keserwan and Jbeil” remains with President Michel Aoun and Maronite Patriarch Beshara al-Rahi, Hizbullah's chief said Monday, in remarks aimed at containing a storm of controversy sparked by the handing over of a symbolic 'key of Keserwan' to a Hizbullah parliamentary candidate.

“Anything that stirs (sectarian) sentiments must be addressed,” Sayyed Hassan Nasrallah said in a televised address on the elections in the Keserwan-Jbeil district.

“Today I tell the people of Jbeil and Keserwan that the key of Keserwan and Jbeil remains with President Michel Aoun, and in Bkirki with Maronite Patriarch Beshara al-Rahi,” Hizbullah's leader added.

Hbeish's handing over of the symbolic key to Sheikh Hussein Zoaiter, Hizbullah's parliamentary candidate for Keserwan-Jbeil, has drawn a huge wave of criticism.

The Central News Agency reported Monday that Interior Minister Nouhad al-Mashnouq has summoned Hbeish to hear his testimony regarding “a step that incited sectarian sentiments and could have led to strife in light of the reactions that followed, which were about to spiral out of control.”

Separately, Nasrallah reiterated that the concept of a “leading sect” or “leading party” in Lebanon has “ended.”

“We must be always governed by the principle of partnership and cooperation,” Nasrallah stressed.

“We want true partnership between Muslims and Christians and we want Christians to have a strong presence in state institutions,” he added.

He emphasized that claims that Hizbullah is seeking demographic changes are “ridiculous and incendiary.”

As for his party's controversial arsenal of weapons, Nasrallah lamented that there are continuous attempts to “scare people of the resistance's weapons.”

“But so far experience has proved that the resistance's arms alongside the army and the people are the basis of security and stability in Lebanon amid the regional blaze,” Nasrallah added.

“The weapons that they are scaring people of were responsible for liberating the country and protecting the country's security alongside the army. These weapons have created a balance of deterrence with the enemy and protected the country in the confrontation against takfiri terrorism on the northern and eastern borders,” Nasrallah boasted.

He added: “I stress to all Lebanese, especially Christians, that the resistance is a main factor in Lebanon's security.”

He has risen!
“And God raised the Lord and will also raise us up by his power.”

Nasrallah: The concept of a “leading sect” or “leading party” in Lebanon has ended and we must be always governed by the principle of partnership and cooperation.

So a party with 50,000 armed terrorists and 100,000 rockets is a not a 'leading' party? Also, how do you want to partner with others that until yesterday you referred to them as 'Israelis' and 'Isis' candidates.

"we want Christians to have a strong presence in state institutions."

and who appointed you King? As mentioned above, start by giving back to the Christians the position of the Head of General Security!

I see... now that you received the "key" to Kesrwein by the aounis you are being generous towards the Christians.

its just not logical to offer partnership in one hand while holding a gun in the other...true partnership starts when the party willingly hands over its arsenal, factories, infrastructure, hidden caches, overseas agents....the list goes on...