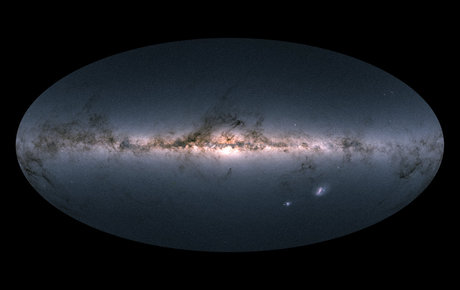 Europe's Gaia satellite has produced a "stunning" 3-D map, published Wednesday, of more than a billion stars in our Milky Way galaxy, complete with their distance from Earth, their color, and their motion through space.

The eagerly-anticipated catalog was compiled from data gathered by Gaia on some 1.7 billion stars over 22 months in 2014-2016, from its unique vantage point in space about 1.5 million kilometers (930,000 miles) from Earth.

"The dataset is very rich and we believe it will revolutionize astronomy and our understanding of the Milky Way," Gaia's scientific operations manager Uwe Lammers told AFP of the massive data release.

"This catalogue is the most precise, most complete catalog that has ever been produced. It allows studies which have not been possible before."

An update, released at the ILA international air and space show in Berlin, adds stars and provides more data on each one. Some were measured as many as 70 times.

The map contains 1.7 billion stars "for which we can tell where they are in the sky with very high accuracy, and how bright they are," said Anthony Brown of the Gaia Data Processing and Analysis Consortium.

For 1.3 billion of those, "we know their distance and we know how they move through space."

There is, furthermore, information on the radial velocities of some seven million stars -- indicating the rate at which they are moving towards, or away from, Earth.

With all this data, "we can make a map of the whole night sky," said Brown, who described the end result as "stunning".

"You see the whole Milky Way in motion around its axis."

Gaia also revealed the orbits of some 14,000 "solar system objects" -- mapped as an intricate spiderweb of space rocks orbiting the Sun.

"It represents the most accurate survey ever of asteroids in the Solar System," said Brown. More will be added in future updates.

Information sent to Earth by Gaia is collated by 450 scientists from 20 countries.

One of them, Antonella Vallenari, likened the data release to "opening a chocolate box".

"It's very, very exciting," she said at the launch event in Germany, webcast live.

The full data will be published in a series of scientific papers in a special issue of the journal Astronomy & Astrophysics.