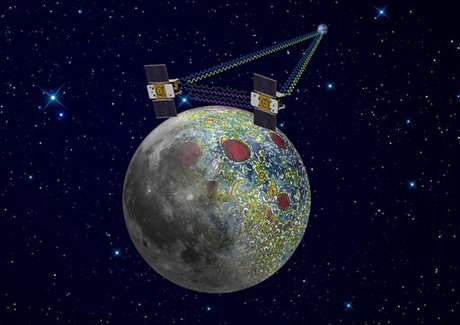 The moon has come a long way since Galileo first peered at it through a telescope. Unmanned probes have circled around it and landed on its surface. Twelve American astronauts have walked on it. And lunar rocks and soil have been hauled back from it.

Despite being well studied, Earth's closest neighbor remains an enigma.

Over the New Year's weekend, a pair of spacecraft the size of washing machines are set to enter orbit around it in the latest lunar mission. Their job is to measure the uneven gravity field and determine what lies beneath — straight down to the core.

Since rocketing from the Florida coast in September, the near-identical Grail spacecraft have been independently traveling to their destination and will arrive 24 hours apart. Their paths are right on target that engineers recently decided not to tweak their positions.

"Both spacecraft have performed essentially flawlessly since launch, but one can never take anything for granted in this business," said mission chief scientist Maria Zuber of the Massachusetts Institute of Technology.

The nail-biting part is yet to come. On New Year's Eve, one of the Grail probes — short for Gravity Recovery and Interior Laboratory — will fire its engine to slow down so that it could be captured into orbit. This move will be repeated by the other the following day.

Engineers said the chances of the probes overshooting are slim since their trajectories have been precise. Getting struck by a cosmic ray may prevent the completion of the engine burn and they won't get boosted into the right orbit.

Once in orbit, the spacecraft will spend the next two months flying in formation and chasing one another around the moon until they are about 35 miles (56 kilometers) above the surface with an average separation of 124 miles (200 kilometers). Data collection won't begin until March.

Previous missions have attempted to measure lunar gravity with mixed success. Grail is the first mission dedicated to this goal.

As the probes circle the moon, regional changes in the lunar gravity field will cause them to speed up or slow down. This in turn will change the distance between them. Radio signals transmitted by the spacecraft will measure the slight distance gaps, allowing researchers to map the underlying gravity field.

Using the gravity information, scientists can deduce what's below or at the lunar surface such as mountains and craters and may help explain why the far side of the moon is more rugged than the side that faces Earth.

The probes are officially known as Grail-A and Grail-B. Several months ago, NASA hosted a contest inviting schools and students to submit new names. The probes will be christened with the winning names after the second orbit insertion, Zuber said.

Besides the one instrument on board, each spacecraft also carries a camera for educational purposes. Run by a company founded by Sally Ride, the first American woman in space, middle school students from participating schools can choose their own lunar targets to image during the mission.

A trip to the moon is typically relatively quick. It took Apollo astronauts three days to get there. Since Grail was launched from a relatively small rocket to save on costs, the journey took 3 1/2 months.

Scientists expect the mission to yield a bounty of new information about the moon, but don't count on the U.S. sending astronauts back anytime soon. The Constellation program was canceled last year by President Barack Obama, who favors landing on an asteroid as a stepping stone to Mars.