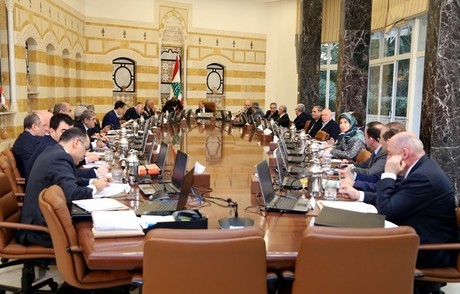 Prime Minister-designate Saad Hariri is set to begin lining up his government starting next week amid reports that the future Cabinet will see two new ministries added to the already 30-member assembly, the Kuwaiti al-Anbaa daily reported Saturday.

“Monday will see another day in the path of the Prime Minister in charge of forming an expanded government of national unity, as described by Speaker Nabih Berri, and it will be comprised of 32 ministers to include for the first time, minority Alawite and Christian ministers,” said the daily.

In 2016, Lebanon added two new portfolios, an anti-corruption post and a minister for women’s affairs, forming a 30-member Cabinet.

Hariri was designated Thursday for a third term as Lebanon's prime minister.

A nation riddled with corruption whose national debt is the 3rd highest in the world at $90 billion has 128 members of parliament and 32 cabinet ministers!

the highest national debt per capita in the world;)

More enormous salaries to pay on top of the 240.000 USD one MP gets every year. ( plus occult commissions, thefts, etc...)

There’s an ongoing exodus of Lebanese youth. My favorite cousin sold his house and business and relocated in Morocco with his parents’ blessing. So sad.

The whole idea is to expand influence and the sphere of their business.In reality more than half of the ministries are disfunctional not to mention are not needed. Ministry of sports and culture realy? An environmental ministry that cannot even shut down one illegal gravel pit. Tfeeh on all of them taking loans that they enjoy and our great grand children will inherit. There is not one singular clean minister between them.