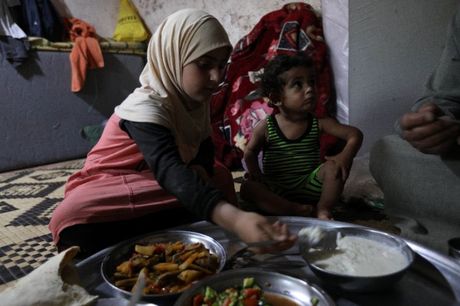 After years of Syrian government siege, Umm Samer can finally prepare an appetising spread to end her family's daily Ramadan fast. But war has given the holy month a bitter aftertaste.

Crouched near a tiny gas stove in the mud hut that is now her home in northwest Syria, the 51-year-old from Eastern Ghouta slices a juicy aubergine into large chunks for the evening meal.

"Yes, there's plenty of food here, but being far away from home is really hard for us," Umm Samer says of her hometown of Zamalka, in the former rebel enclave.

Umm Samer, her husband and five children -- two of them disabled -- fled Ghouta around two months ago as it came under government control, setting up near the town of Maaret Masrin in Idlib province.

Their memories of life in Ghouta are stained with siege: during the government's five-year encirclement, medicine was hard to find and child malnutrition rates soared as affordable food became scarce.

Every day, Umm Samer did her best to stave off her children's hunger with a meagre diet of radishes, spinach and parsley.

When they could, they ate small portions of bulgur wheat or barley bread, which often gave them stomach aches.

When the month of Ramadan came around, the family would observe the day-long fast like millions of other Muslims around the world.

But instead of breaking their fast at sundown with traditional multiple-course meals and desserts, Umm Samer's family gathered around the same sparse spread.

"We'd eat it all with spoons because there was no bread. We couldn't even get biscuits for the kids," she recalls.

"Sometimes we'd wait two days before breaking our fast because there was nothing to eat," she says.

- Donated meals -Across the Islamic world, Ramadan is a month of prayer and remembering the less fortunate, but also a time of endless gatherings with loved ones.

In Ghouta, says Umm Samer, the heavy raids made that impossible.

"We wouldn't dare meet up for iftar anymore," she says, referring to the fast-breaking sunset meal.

"This year in Idlib it's very different. There's rice, meat, vegetables, fruit and sweets," says Umm Samer, sitting down cross-legged on a simple mat for iftar.

They begin with sips of chilled water, then dig into dishes of turmeric-flavoured rice, salad and stewed vegetables.

The meal is plentiful compared with what they were eating just a year ago, but Umm Samer says starting a new life for a seven-member household is tough.

"Over there, you're fine because it's your hometown, your home and your land," she says.

"None of us work here. The relief groups help us but it's limited," she worries.

Like in Muslim communities around the world, aid groups in Idlib are distributing iftar meals to families in need.

One of them, Al-Bunyan Al-Marsous, prepares dozens of sealed packages of rice and meat every day. Men and women line up outside their centre to pick up the food packages.

- Missing loved ones -Such meals are life-changing for Umm Mohammed, 53, who was displaced from Ghouta a month ago with her husband, two daughters and two sons.

They too resettled in the camp of earthen huts in Maaret Masrin, but siege is still on their mind.

"We once spent 11 days without me putting a single pot on the fire", says Umm Mohammed.

Cooking radishes was unheard of before Syria's war erupted, but it became a stable in Ghouta: "We were under siege and whatever was available, we would cook."

She crouches down on a wool carpet as her husband pours her a glass of juice to break her fast, before they begin a donated iftar of rice, chicken and meat pies.

More than 350,000 people have been killed and millions displaced since Syria's war started in 2011 with the brutal repression of anti-regime protests.

Two of Umm Mohammed's sons, both fighters in Ghouta, were killed last year.

"There's a huge difference between this Ramadan and last," she says.