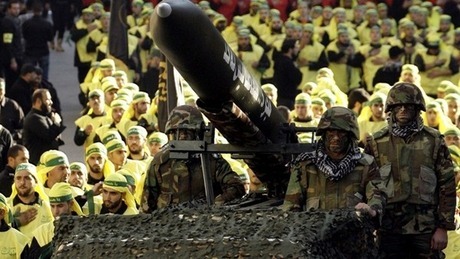 It said on Twitter quoting “activists” that air raids believed to be Israeli, have struck Hizbullah military positions and an arms depots in the western region of Qalamoun in Syria.”

The strike came around 5:00 am according to reports.

The sources said that violent explosions rocked the area near Assal al-Ward and were caused by Israeli raids on the party.

The reports could not be confirmed, it added.

Around 500 Iranian military advisers and members of Hizbullah, are deployed in the south of Syria.

Hezbollah cant seem to find a proper response to these Israeli air raids that has become a routine by now. They just have to sit back and accept it, as the alternative is a full scale war that will get them bombed into oblivion.

These of course is another solution for Hizballah. Get the hell out of Syria.

phillipo u want a lebanese citizenship? President Aoun is giving them away like we're going out of business.

And we are happy with them :-)

Nassrallah revealed that Israel was warned via a foreign state that “the next response would be in the heart of occupied Palestine".

how much bitxslapping can they take? this is the 150th air raid on them since 2011! they have zero dignity and pride whatsoever!

Laugh as much as you like any moment now Kizballah is going to take over Israel, Ireland and the Outer Hebrides in response to this unwarranted attack on their peace emissaries in Syria. Reports from Israel indicate that the airports and ports are full of Isreali citizens leaving the occupied lands and immigrating to Australia fearing the threats of the mighty bearded goat of Kizballah.
All joking aside though just imagine the level of sophistication of the average moped rider in el Shiya7 listening to the bearded goat threaten yet again the destruction of Israel to no avail. How gullible can they be? its safe to assume that their minds are so indoctrinated that they would on orders simply march themselves into a brick wall while their headbands were set on fire....happily doing so too!

I would never be able to understand such unwarranted hostility towards our resistance in Syria. To die such a horrible death or to lose a limb or an eye or to get mutilated is something unimaginable to us supporters of these men of god who have dedicated their lives to resistance, drugs, kidnappings, and liberation.

body bags and more of it

abe_Lincolnstein 2 days ago 06
phillipo u want a lebanese citizenship? President Aoun is giving them away like we're going out of business
No thanks - I've got British