Hariri: 30-Minister Cabinet to Be Formed 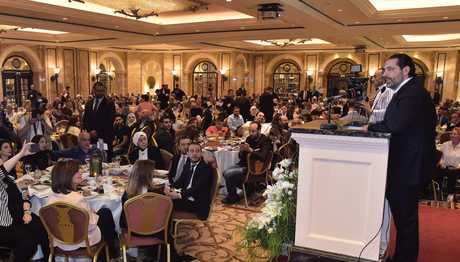 Prime Minister-designate Saad Hariri announced on Tuesday during a Iftar in Beirut that the government to be formed will be comprised of 30 ministers.

“The government that we will form hopefully will be of 30 ministers, this is the maximum that I can announce, and cooperation is ongoing with all parties to accomplish this task,” said Hariri in a speech he made.

“I am optimistic that all political parties are cooperating to form this government. If we want to please each party regarding the number of ministers it wants, we would form a government of 50 ministers,” he added.

The Iftar was organized by the Union of Beirut Families Associations in the Phoenicia Hotel, in the presence of caretaker Interior Minister Nouhad al-Mashnouq, Grand Mufti Sheikh Abdul Latif Deryan and members of the families.

Hariri added: “There is no doubt that one of the most difficult tasks the Prime Minister- designate may face is to speak during the stage of forming the government because everything he says is subject to interpretation and considered the result of the formation negotiations. Everything I say will be considered a message to this or that political party.”

“I thank everyone for the work they do, and thank you for the parliamentary elections. The battle was harsh against us, but thank God we made our presence felt. Today, we have to work more vigorously. I promised you to work more, faster and with more openness. You will see that the doors of the Center House will be open to everyone,” he stated.

Please, please don't forget the anti corruption ministry; Nadir Hariri is an ideal fit for it.;)

That would be just great, the icing on the cake of corruption!

Dude please please please don't forget Ms Mireille Aoun-Hachem. Her sisters got their lifetime government pensions from their hubbies while poor Roy is stuck running the OTV... into the ground!

poor baby, my heart bleeds for them