Plane Catches Fire on Landing in Kyrgyzstan, At Least 6 Injured 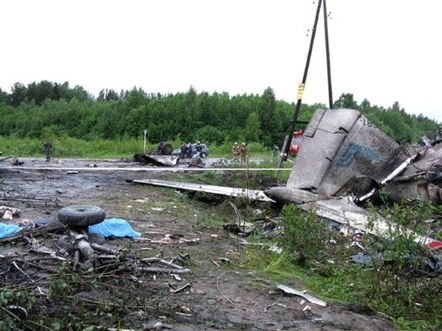 A packed Russian-made Tu-134 passenger jet flipped over and caught fire on landing in the southern Kyrgyz city of Osh on Wednesday, injuring at least six people, officials and witnesses said.

There were no immediate reports of fatalities, with officials reporting bad weather conditions at the time of the accident on the Kyrgyzstan Airlines flight, which was carrying 79 people, including nine children.

A local airport representative told Agence France Presse the plane had made a hard landing and flipped over.

"Its right wing and chassis fell off, the plane slid past the runway by 40 meters (130 feet) and caught fire," the representative said. "The passengers were evacuated."

The plane was flying from the Central Asian republic's capital Bishkek.

The Kyrgyz emergencies ministry said six people were injured in the accident, although an eyewitness at the airport said 18 people had been hurt.

"Everyone is on their feet. These are all light injuries," witness Egamberd Kabulov said by telephone. "One of the crew members suffered a blow to his head."

The Tupolev Tu-134 is one of the Russian-made jets still in international service. Introduced in 1967, the plane suffered a series of deadly accidents in Russia this year that prompted President Dmitry Medvedev to call for most of the aircraft to be retired by January 1.

It is still widely used across the former Soviet republics, as well as nations in Africa and Latin America.