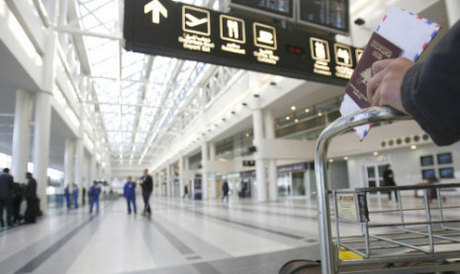 According to reports, Hizbullah is allegedly “using Beirut’s airport to facilitate the smuggling of weapons and fighters in favor of Iran,” the Washington Times said.

The daily said Hizbullah is “corrupting” the Rafik Hariri International Airport and has allowed the “Iranian Revolutionary Guard Corps to take the airport as a base for Iranian regime operations, which consists of transporting weapons and fighters to locations and countries serving the Revolutionary Guards’ strategy for regional intervention.”

The daily added that the Lebanese embassy in Tehran has reportedly “announced that in order to facilitate the travel of Iranians to and from Lebanon, their passports would not be stamped at Beirut airport during their trip to Iran.”

The Iranian Revolutionary Guard Corps, a branch of Iran’s armed forces, has been meddling in several wars in the region including Syria, Iraq, Yemen and Lebanon, playing a major role in fuelling them.

No official word from Lebanese officials so far regarding the allegations.

Yes and to help the ranian Revolutionary Guard Corps, Abbas Ibrahim did confirm yesterday that Iranians will not have their passports stamped should they wish but instead have the stamps on a separate form.

And here we have the daily Naharnet propaganda.
How can you smuggle Iranians through the airport?

They come to visit Lebanon just like any other tourists.

by not having their passports stamped, genius!

Where are you Mystic? Still in Hudeidah or already in Riyadh?

Were those two dead shia iranian terrorists in your avatar smuggled into Syria as Pilgrims?

And all those Saudis that smuggles themselves here to party with drugs, what about them.

Come on guys what's the big deal. Listen to brother Mystic. It's a known fact that most tourist use the secured military route whenever they leave the airport, it's a major tourist attraction and popular destination. Just the other day I saw an Estonian, a Dane and a Chinaman walk into secured military route. I know it sounds like the beginning of a joke but it's true. And passport stamping, that's a thing of the past, no one does it anymore. Ask Qais al-Khazali, Akram al-Kaabi and Abu Abbas.

Mystic, you are so predictable and mutawaqa3, it's so boring to read you.

Loooooool they come to visit Lebanon on tourism? really? looooooooooool I think you meant terrorism.

First, I must thank you for being Patriotic and not giving this article any credence. Your ability to pinpoint the CIA as being the source of the Washing Times article is mind blowing. Add to this your uncanny ability to site examples like Ja3ja3 reliability is nothing short of a masterpiece in detective work and assimilation of facts.

I have learned so much from you and am indebted to you for who I have become: a well rounded and politically aware young Lebanese reader.

But justin, Gebran Bassil is not trusted by the "patriotic" crowd, he's the leader of Tayyar Al-Tatbee3 remember?

and you retard are as 'reliable' as southern when it says it is atheist:)

"the Lebanese embassy in Tehran has reportedly “announced that in order to facilitate the travel of Iranians to and from Lebanon, their passports would not be stamped at Beirut airport during their trip to Iran.”

But a Lebanese citizen MUST have his/her passport stamped in and out of the country!

roflmao @ " unless nassrallah pays his thousands of terrorists in bitcoins or cryptocurrency!"

Ebola is a disease spreading everywhere.

"Lebanon Is Protecting Hezbollah’s Cocaine Trade in Latin America
The country's institutions are not a counterweight to Hezbollah, but its enablers."

The question is the following, who has the legal authority to decide this? obviously not the airport management nor the cops. This is the person that must be "harcelatted" by the good people.

The Lebanese foreign ministry has confirmed it's policy that Iranians visiting Lebanon will not have to get their passports stamped by customs when they enter and depart the Rafik Hariri International Airport. Iranian are the only foreigners, other than the Palestinians, that do not need their passports stamped when they enter and departs the Lebanese territory and the reason for this unusual privilege is:
Alireza Zakani Iranian MP close to Khamenei: "Three Arab capitals Beirut, Damascus, and Baghdad have already fallen into Iran’s hands and belong to the Iranian Islamic Revolution..."
General Hussein Salami, Deputy Commander of the Iranian Revolutionary Guards: "Islamic Revolution has influenced states and people from the Mediterranean Sea to the Bab el-Mandeb in Yemen..."
General Qassem Soleimani, the commander of Iran’s Islamic Revolutionary Guard Corps Qods Force: "Hezbollah for the first time won 74 seats out of 128 Lebanese parliamentary seats.."

Seriously!? I mean... every Lebanese with common sense that travels often has witnessed or heard stories about how Ebolas use and abuse of their power and total control of the airport... After all, they waged a war in 2008 because the government wanted to fire the Airport Manager... and they sent us their Black Shirts with weapons all over Beirut...
Hezbollah smuggles, and OWNS our airport... AND Port... FACT! Disgusting fact... but FACT!