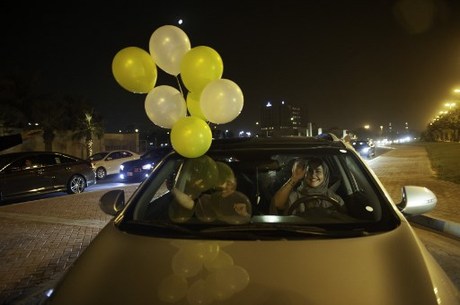 Saudi women celebrated taking the wheel for the first time in decades Sunday as the kingdom overturned the world's only ban on female motorists, a historic reform expected to usher in a new era of social mobility.

The much-trumpeted move is part of Crown Prince Mohammed bin Salman's plan to modernize the conservative petrostate -- but it has been dented by the jailing of female activists who long opposed the driving ban.

Women in Riyadh and other cities began zipping around streets bathed in amber light soon after the ban was lifted at midnight, with some blasting music from behind the wheel.

"I feel free like a bird," said talkshow host and writer Samar Almogren as she cruised across the capital.

Television presenter Sabika al-Dosari called it "a historic moment for every Saudi woman" before driving a sedan across the border to the kingdom of Bahrain.

The lifting of the ban, long a glaring symbol of repression, is expected to be transformative for many women, freeing them from dependence on private chauffeurs or male relatives.

Euphoria was mixed with disbelief as women across the kingdom flooded social media with videos of their maiden car rides, with a heavy presence of policemen, some of whom distributed flowers to the first-time drivers.

"This is a great achievement," billionaire Saudi Prince Al-Waleed bin Talal said as his daughter Reem drove a family SUV, with his granddaughters applauding from the back seat.

"Now women have their freedom," he added in a video posted on Twitter.

Many Saudi women ebulliently declared plans online to drive for coffee or ice cream, a mundane experience elsewhere in the world but a dazzling novelty in the desert kingdom.

"The jubilance, confidence and pride expressed by Saudi women driving for the first time in their country, without fear of arrest, brought tears to my eyes," tweeted activist Hala al-Dosari, while lauding the jailed campaigners.

"I'm happy and relieved that... girls in Saudi will live a bit freer than their mothers."

But many women are keeping away, testing reactions in a society torn between tradition and social change -- and bracing for a possible backlash from hardliners who have long preached that allowing female motorists would promote promiscuity and sin.

The decision to lift the ban was catalyzed in large measure by what experts characterize as economic pain in the kingdom owing to a protracted oil slump.

The move is expected to boost women's employment, and according to a Bloomberg estimate, add $90 billion to economic output by 2030.

For now, the women taking to the roads appear mainly to be those who have swapped foreign licences for Saudi ones after undergoing a practical test.

Some three million women in Saudi Arabia could receive licenses and actively begin driving by 2020, according to consultancy firm PricewaterhouseCoopers.

A handful of female driving schools have cropped up in several cities, training women to drive cars as well as Harley Davidson motorbikes -- scenes unimaginable even a year ago.

But many women fear they are still vulnerable to sexist attitudes in a nation where male "guardians" -- their fathers, husbands or other relatives -- can exercise arbitrary authority to make decisions on their behalf.

The government has preemptively addressed concerns of abuse by outlawing sexual harassment, and authorities have sternly warned against stalking women drivers.

"To all men I say, be gentle towards women" drivers, popular Saudi singer Mohammed Abdu said in an online video.

Prince Mohammed, appointed heir to the most powerful throne in the Middle East a year ago this month, has also lifted a ban on cinemas and mixed-gender concerts, following his public vow to return the austere kingdom to moderate Islam.

However, much of the initial optimism over his reforms appears to have been knocked by a major crackdown on women driving activists.

Authorities have said nine of 17 arrested people remain behind bars, accused of undermining security and aiding enemies of the state.

The detainees include 28-year-old Loujain al-Hathloul -- also held in 2014 for more than 70 days for attempting to drive from neighboring United Arab Emirates to Saudi Arabia -- and Aziza al-Yousef, a retired professor at Riyadh's King Saud University.

State-backed newspapers have published front-page pictures of some of the activists with the word "traitor" stamped across them in red.

Human Rights Watch last week said the kingdom has arrested two more female activists and many others have been barred from traveling outside the kingdom, in what it denounced as an "unrelenting crackdown."

Even some of the crown prince's ardent supporters have labeled the crackdown a "mistake."

It has been seen as a calculated move both to placate clerics incensed by his modernization drive and also to send a clear signal to activists that the prince alone is the arbiter of change.

"If the authorities give credit to the women who championed lifting the driving ban, it means conceding that reforms can be won through activism, and then the Saudis may demand more," said HRW researcher Rothna Begum.

"Saudi Arabia's crown prince wants it both ways: to be lauded as a reformer on the world stage, and to ensure his status as the only reformer at home."