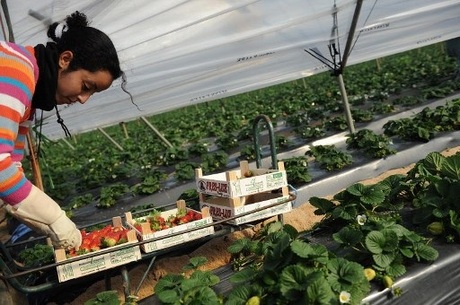 Ten women who left their children at home in Morocco to earn money picking strawberries in southern Spain have said that they were lied to, exploited and even sexually harassed.

They told AFP how their seasonal jobs turned into a nightmare, with punishing work schedules, "free" accommodation they had to pay for, and in one case attempted rape by a manager.

The claims have prompted fears that such exploitation may be more common across the industry in Spain's south, which is Europe's top fruit and vegetable exporter.

The women are currently living in the southern region of Andalusia, housed by the local SAT union which is supporting them, in an area they asked not be made public. Five have filed official complaints and the others are planning to do so.

They are all mothers -- having children is a condition to get the job, a guarantee they will return to Morocco at the end of the February-June picking season.

"What is in the contract has nothing to do with reality," says Layla, 31, whose name has been changed to protect her identity, as was those of the others who spoke to AFP.

Layla is one of 16,000 Moroccan women who came to Andalusia to pick strawberries earlier this year, compelled by poverty back home.

Like the other nine women, Layla worked in the province of Huelva in Andalusia for the large Donana 1998 company, which categorically denied the allegations and had accused the women of creating a scandal to try to stay in Spain.

But instead she says "we were told it was the second harvest" and they would be paid for how much they picked -- 75 cents for every five-kilogram (11-pound) crate.

And they had to "pick strawberries very, very quickly" or they were banned from working for several days, she adds.

The contract also said there would be free accommodation, but she says she was charged three euros a day.

Charifa, 23, says no one defended them "as women" and bursts out crying as she describes how her manager offered her 50 euros in exchange for sex.

The room becomes quiet when Fadila, 29, speaks of the time she accepted an offer by the "chief" to give her a ride in his car.

"I had to fight him in the front seat, he grabbed me and kissed me forcefully, he touched my breasts and..." she says, without finishing the sentence.

A petition denying the women's accusations and defending the company has been signed by 131 other Moroccan seasonal workers.

Donana 1998 itself has refused to answer questions, with a spokesman saying "everything is in line with regulations."

But in a radio interview, Manuel Matos, one of the company directors, accused the SAT union of manipulating the women into lying for political reasons.

Prosecutors in Huelva say at least 12 complaints have been filed by eight Moroccan and four Spanish women who were picking fruit in three different farms.

A spokesperson for prosecutors in Huelva said several managers have been charged with alleged "sexual abuse", but did not say how many.

Belen Lujan, a lawyer for some of the workers, says dozens more women would like to press charges but "are scared to do so" or have already returned to Morocco.

As Spanish workers are increasingly drawn away from seasonal work, the number of Moroccans hired has risen from 200 in 2001 to more than 16,000.

To be eligible, they must be women aged 18 to 45, "from a rural area", "healthy" and "with children under 14," according to Morocco's Anapec governmental job agency.

Diego Canamero, a lawmaker for the far-left Podemos party and a farmer in Andalusia, says there is "no control" over the companies.

The Cepaim foundation, which works to ease migrant integration, says the women find themselves in "situations of huge vulnerability due to their pressing need to keep their families afloat."

Cepaim members visited dozens of strawberry farms and reported "confiscated passports", "women left without work for several days to punish them for not picking enough strawberries," or "salaries only paid on the day of return."

The regional government of Andalusia announced on June 13 that it was drafting "zero tolerance" measures for the industry to come into force next year.

These include giving the seasonal workers leaflets in their language that lay out their rights.