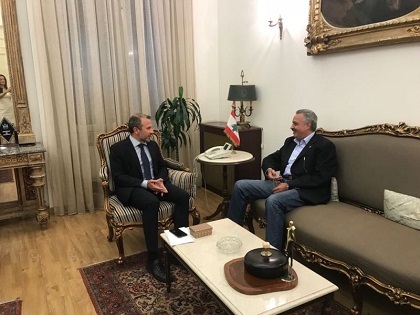 The meeting comes after Arslan was dismayed by remarks deemed insulting to the “Druze martyrs” of the civil war which have been voiced by senior FPM official Naji Hayek.

Arslan had called Bassil in recent days to protest the remarks, according to al-Akhbar newspaper.

“Bassil promised him to address the situation and they agreed on a meeting that would be held today at the Foreign Ministry,” al-Akhbar said.

“In 10 days, you and us will remember the monkeys that you sent to Souk al-Gharb on August 13, 1989 before Michel Aoun sent them back to you in sackcloth bags,” Hayek said.

His remarks sparked a storm of heated popular and political responses, with young men from the PSP blocking the road in Chouf in protest.

so talal was made a MP by default with an unfilled seat..could have been easily won by PSP. Then he was made a head of a 3 members parliament block with 2 MP from aouni boys NOW jibran dude wants to make talal a minister ...common this is lame and laughable at best ..