India to Send Manned Mission to Space by 2022, Says Modi 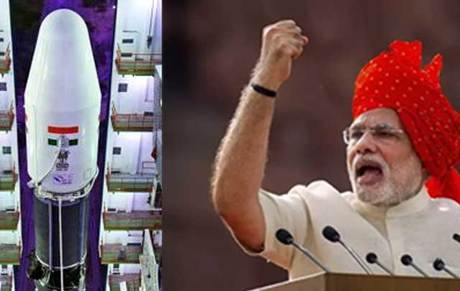 India will send a manned mission into space by 2022, Prime Minister Narendra Modi announced Wednesday in a speech to the nation.

"India will send into space -- a man or a woman -- by 2022, before that if possible," Modi said in a marathon address at the Red Fort in New Delhi for the country's Independence Day.

The astronaut would be "carrying the national flag," Modi said.

The conservative prime minister said that India would be only the fourth country -- after Russia, the United States and China -- to launch its own manned space mission.

Stepping up its rivalry with China, India has invested heavily in its space programme in the past decade.

It is aiming to send an unmanned mission to the moon in January 2019, the Indian Space Research Organisation announced last week.

The Chandrayaan-2 orbiter will aim to put a craft with a rover onto the moon's surface to collect data. Design changes to the craft forced the space body to push the launch back from this year.

Chandrayaan-1, launched in 2008, orbited the moon and sent a probe to the surface which made a controlled crash landing.

India also launched an orbiter to Mars in 2013 which is still operational and in 2017 launched a record 104 satellites in one blast-off.