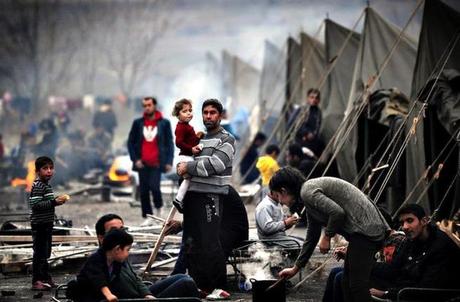 A month after the launch of the Russian plan to repatriate Syrian refugees in Lebanon back to their homeland, Moscow hopes that the process will gather momentum after the scheduled talks on Monday between caretaker Foreign Minister Jebran Basil and his Russian counterpart Sergei Lavrov, pan-Arab al-Hayat daily reported.

The two ministers will discuss “international and regional issues in detail, focusing on the development in the Middle East mainly in Lebanon and Syria, and the comprehensive work being initiated by Russia to facilitate the return of Syrian refugees to their homeland," a statement released by the Russian foreign ministry said.

Given the European position that links the return of refugees and the reconstruction process in Syria to progress in the political situation, Moscow is betting that Lebanon will be the first to begin the repatriation process of Syrian refugees, said the daily.

It added that “Hizbullah and its allied forces, including the Free Patriotic Movement represented by Bassil, have welcomed the Russian initiative for the repatriation of refugees presented last month by Russian presidential envoy to Syria Alexander Lavrentiev with Prime Minister-designate Saad Hariri.”

According to Russian data, some 8,000 Syrian refugees returned from Lebanon last month in a wave of returns to their war torn country.

Lebanon hosts around 1.5 million Syrians who fled the civil war across the border, many of them in the Bekaa Valley in the east of the country.

According to the UN refugee agency, UNHCR, around 13,000 Syrians went home from Lebanon during the first six months of this year.

More than 350,000 people have been killed and millions displaced since Syria's war started with the brutal repression of anti-government protests in 2011.

But President Bashar al-Assad has called for displaced Syrians to return since his regime ousted rebels and jihadists from large parts of the country following a massive military intervention by regime ally Russia.

The proposal includes the establishment of working groups in both Lebanon and Jordan, involving US and Russian officials.

Earlier this month, Syrian state media said the government was to set up a committee to coordinate repatriating millions of its nationals.

Last week, Lebanon's General Security agency announced it had opened 17 centres across the country to receive applications for Syrians who want to travel back home.

our syrian refugees should not be screened by the regime, they should be relocated in the Idlib province where they can decide whether they wish to move back to Assad controlled land or not. As long as none of this is taken into consideration, they're welcome to remain in Lebanon. We all know that Putin and Erdogan are best pals, they can certainly work this detail out together.

hopefully you will get your daily trolling from eagle daesh, justine, galaxy, IceNorMan etc... instead of your 72 virgins