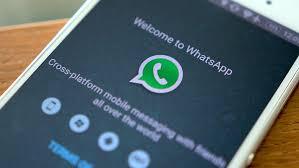 India on Tuesday called on WhatsApp to clamp down on fake news spread on the messaging app that has been blamed for lynchings across the vast South Asian country.

Mobs have killed more than 20 people in two months following unfounded allegations spread on the Facebook-owned platform, which has 200 million users in India.

Prasad said on Twitter that he had asked the firm "to work closely with law enforcement agencies of India and create public awareness campaign to prevent misuse of WhatsApp."

The minister said he was assured by Daniels that WhatsApp "will soon take steps" to comply with New Delhi's demands, which include opening a corporate office and the appointment of a grievance officer in India to act on complaints.

The Indian government has stepped up pressure on WhatsApp as the number of killings has grown.

The firm rolled out new safeguards in July -- including limiting the number of users a message can be forwarded to -- and ran newspaper adverts to raise awareness about fake news.