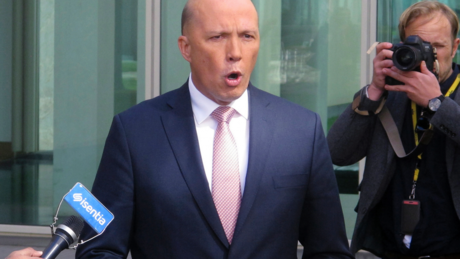 Peter Dutton, the government lawmaker who has challenged Australia's prime minister for his job, is publicly perceived as a hard man and a leading hard-right conservative. His face is associated with turning back asylum seekers boats, stripping citizenship from extremists and striving to increase the English-language standards for migrants who want to gain citizenship.

Dutton gave up the largest security portfolio in the government when he resigned as Minister for Home Affairs, who controls the newly created Department of Homeland Security designed to tackle the new security threats of a changing geo-political environment.

While highly regarded by the conservative Liberal Party's hard-right faction, his broader appeal has been questioned, particularly among ethnic minorities.

He has been criticized for saying the level of Lebanese Muslim immigration under a humanitarian program in the 1970s had been a mistake that Australia was now paying for through a rise in domestic extremism.

He also attracted accusations of racism through comments that white farmers under threat of violence in black-majority South Africa should be treated as refugees because "they need help from a civilized country." He has angered many in the ethnic-African community by saying people in Victoria state were "scared to go out to restaurants of a night time" because of "African gang violence."

Dutton, 47, is a former police drug squad detective from the politically and socially conservative state of Queensland.

He was first elected to Parliament in 2001 and quickly rose to the rank of minister three years later.

He became Minister for immigration and Border Protection in 2014, when he became responsible for Australia's contentious policy of sending asylum seekers who attempt to reach Australia by boat to immigration camps paid for by his government on impoverished Pacific island nations for Papua New Guinea and Nauru. The Australian navy also turns asylum seekers boats back to Indonesia, which Jakarta regards as an affront to Indonesian sovereignty.

I bet the shia australian billionaire is roaring with fear of deportation.

one of these Australian thugs called for a "final solution" last week against immigrants and refused to apologize. Australia is going nazi style!

these people forget they're all immigrants... at the expense of the Aboriginal Australians .

The 'australian' from dahieh (who does not speak arabic) does not mind if some of his hezbollah terror militia immigrated to Australia because they "assimilate".

"the_roar:
As a Christian, Its a debt we owe to HA & a friendship & trust to hopefully last forever.
May the righteous forever stand strong."

"the_roar: 3 hours ago
I haven't posted in a long time, but who said I havn't checked out the articles & posts?"

"TOP DEFINITION of Lurk"
lurk:
"On a messageboard or anything similar, to browse the board very often, but without ever posting anything."
That guy is always lurking, but he never posts."
http://www.urbandictionary.com/define.php?term=lurk

So, Buzz off troll....you have been weighed & measured & found to be very lacking.
NEXT!

What his notes show is you were a filthy troll back then and you are filthy troll right now. In other words, nothing changed.

"Muslims immigrating & not adhering to other nations laws is something else..."

and in your imagined world of Australia, is there a law that specifies what people should dress, or an Australian dress code?

Your under powered brain cannot distinguish between tradition/custom and law.

I also take it if Christians immigrating & not adhering to other nations laws is something fine by you.....

What the_roar is saying: he owes hezbollah; he is friends with hezbollah and wilayat al faqih; he trusts hezbollah and its way of life along with its customs but he prefers to maintain a long distance relationship.

Incorrect once again, may I suggest you stop guessing & posting for the sake of it.

in no way do i owe HA or any muslim a thing. I do not subscribe to Ha's way of life.

But reality is this! If it were not for HA, Lebanon would be in the hands of Isis & co.

No thanks, I prefer the Muslim who is defending his land & his brothers including the Christians of Lebanon.

Until HA tries to convert Christians by force or behead Christians & eat their hearts then HA is fine by me defending Lebanon from those who do.

your words above speak for themselves. Stop digging your own grave any further. It is clear.
lol

so the troll believes hezbollah is fine in Lebanon because it assimilates?

Roar you still alive? Long time no see. Can you please update us based on your high level security meetings if jeddo aoun will finish his term standing on 2 feet? What is your take on the maarab agreement. I truly value your opinion

I just found this on wikiipedia
the_roar : "A wealthy Australian who travels the globe & has inside knowledge that no other person on this planet knows about"

Hezbollah is Iran's agent planning takeover of Lebanon, and succeeding step by step. Lebanon's long term outlook is not good.

The truth is... for Lebanon to survive it must align with Israel:

When you scream Labayka Ya Hussain how do you 'assimilate' in australia?

Btw, you also must have European parents, no?

lol he certainly does. And I bet he befriended the candle thief too!

A lof of BS assimilated in one paragraph! Well done.

"Basically treat a Muslim from KSA the way the Saudi's treat Christians, Jews and Shia in KSA, same goes for Iran and other majority Muslim countries and lets see what happens."

Lol a muuslim from Dubai goes to a western country to see bikini wearing westerners lol. Unless hes there for the "waters" lool.

100% Canadianleb, If accept moving to a nation then you need to accept its rules. That said though you would be pushed to see an Arab accept rules....

I don't beleive the news above is about peoples religious dependencies but rather about respecting the law in the nation you chose to visit or immigrate to.
The Lebanese have been without the law for so long that they possibly fail to understand is that the law is there to protect the welfare of the nation itself rather than the individual. In Lebanon the individual looks about his welfare first and the law is something you get around.
Australia like many other nations has not only felt the pinch of the immigrants from a financial perspective but also their impact from a civil liberties side too. They majority will simply be asking for the protection of the welfare of their nation.

"I don't beleive the news above is about peoples religious dependencies"

Read what he said :

"He has been criticized for saying the level of Lebanese MUSLIM immigration under a humanitarian program in the 1970s had been a mistake that Australia was now paying for through a rise in domestic extremism."

Thanks Citizen,
Mr. Dutton is an Australian citizen and I am not. He is entitled to have his opinion about his countries policies as much as you and I have about Lebanon's policies. He was wants immigrants to respect the law (even though as you correctly pointed out he maybe biased) as much as I want the Iranian and Syrians to respect Lebanons laws. The point being made is not about Islam, but rather the laws of the country in question. I care about as much for religion as you would care about the man on the moon, however that said I expect any person Muslim or Bhuddist to respect the law of my country period.

It sounds like your concern is purely from a religious point of view Citizen. :-) if its not pro islam then its wrong. If I was to agree with you then you would be happy and we would be both wrong.

It is the Australian politician's concern that is based on religious bias since he singled out Lebanese moslems. His stance is not about respecting the law as he did not mention that but rather about what he refers to as 'extremism' attributed to Islam.

Well hold on here you cannot be the pot calling the kettle black here. Most of the young set on these threads here are anti Syrian or Iran. And why? is it not for their lack or respect for lebanese law and also due in part that they are not from the same religious sect as you?. Then if a Canadian or an Australian states the same thing he has no right but you do? I think you need to re-evaluate your position here.

lol the man just drew your attention to what Dutton said and now you accuse him of being pro islam?

"He has been criticized for saying the level of Lebanese Muslim immigration under a humanitarian program in the 1970s had been a mistake that Australia was now paying for through a rise in domestic extremism"
.
Lebanon must say to Australia that not received more "refugies"...Australia want´s to send now the "Lebanese" Muslims return to Lebanon !!??? more !!??? ...After the Hyper Mega Mass Migration of the Islam to Lebanon....

Amazing.... ex-Palestinian leader speaks about Hamas at the United Nations:

Look at boutros dutton's photo. He us roaring like that shia roar.